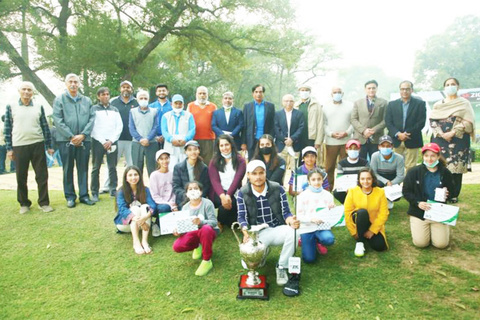 On the opening day, Osama was at his golfing best as he had a round of net 72 which was backed up by a commendable round of net 67 on the second day and in the final round, he again played resolutely and without qualms to come up with an admirable score of net 70 as his aggregate score for three round was 209 net, seven under par.

Abdullah Farooqi of Lahore Gymkhana was the outstanding one in the final round on Sunday, carding a splendid round of net 69, and though he could not obstruct the winning march of Osama, he was successful in acquiring the runner-up slot and in the process prevailing over Hussain Atta who won the third net with an aggregate score of 218 net.

In the gross section, the winner turned out to be Salman Jehangir of Gymkhana with three rounds scores of gross 74, 75 and 78 and an aggregate of 227 gross. The second position holder in gross was Mohsen Zafar (Gymkhana), aggregate score being 231 and Ahsan Khawaja (Gymkhana) came third.

In the ladies category, Bushra Fatima was at her playing best and can be categorized as a golfing genius, to quote Dr Asma Shami, head of ladies golf in Pakistan. Her scores of net 63 and 62 helped her emerged as title winner while Alizeh Ali Shah finished second with net 68 and 73 and Iman Ali Shah earned third position. The ladies gross winner was Parkha Ijaz, Rimsha Ijaz second and Abeeha Syed third.

The net winner in invitational category was Saad ullah Chaudry, followed by Hassan Atta while gross winner was Muneer Qureshi and second was Mian Ahsan Saeed.

At the concluding ceremony, Chairman Lahore Gymkhana Dr Jawad Sajid, Mian Misbah, Sarmad Nadeem and Shaukat Hussain (ZIC Lubricants) gave away prizes to the winners in the presence of golfers and their families.