Prolific golfer, Matloob Ahmed Lahore Garrison stands out as lone leader on the second day of the 39th Punjab Open Golf Championship which teed off at the PAF Skyview Golf Course 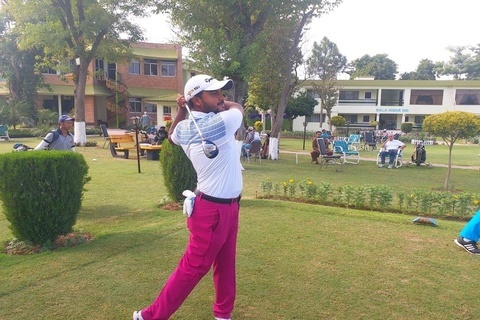 Matloob, who enjoys the number two ranking in the golf circuit of Pakistan, stands out as lone leader on the second day of the 39th Punjab Open Golf Championship which teed off at the PAF Skyview Golf Course, Lahore.

Earlier, on the opening day, the trio of Matloob Ahmad, Muhammad Munir and Talib Hussain jointly claimed the first position.

But on the second day Matloob of Lahore Garrison, despite entering a rather poor card as compared to the first one of two-under-70, aggregated 138, and found him as top on the leaderboard.

Holder Matloob, however, facing a close contest from Munir and emerging Suleman, who are just one-stroke behind to him trailing at the second spot with a two-day aggregate 139, each.

Suleman, who mustered a poor card of three-over-75 on the first day, played an excellent second round of eight-under-64 to match Munir’s aggregate of 139. He excelled in his shooting approach shots and putting. So far Matloob proved as most consistent in his performance, but to defend a one-stroke slim lead will not be easy for him on Sunday.

Another capable one of our golfing ranks, Munir’s second round effort was steady and enabled him to appear as a strong contender in the final round.

Another golfer who came out with excellence was Talat Ijaz of Lahore Gymkhana. His two-under-par round of 70 placed him at the fourth position and his aggregate score after two rounds is 141, three-under par.

Some others who have come up with noteworthy scores are, M. Shahzad of Garrison is placed at score of 142, followed by Ahmed Baig at 143 and another promising youngster Zohaib Asif of DHA Karachi at 143. Shabbir Iqbal is placed at a similar score.

In the amateurs’ event, Salman Jehangir has displayed good form to lead with two rounds scores of 70 and 75 for an aggregate of 145. His nearest challenger is Qasim Ali Khan who lags behind by four strokes. Col Rustam Chatta is on 154.