Pakistan hockey in a shambles

The Azlan Shah Hockey tournament recounted a tale of woes for the national team as it plummeted to new lows in what can only be described as a second-tier tournament. 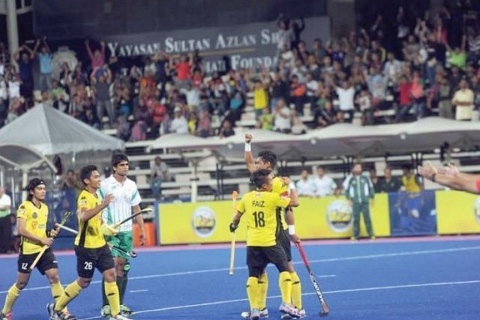 25th Sultan Azlan Shah Cup      Malaysia
The Azlan Shah Hockey tournament recounted a tale of woes for the national team as it plummeted to new lows in what can only be described as a second-tier tournament. The annual hockey carnival in Malaysia generally doesn’t attract top European teams and this edition was no different with only world champions Australia and defending champions New Zealand representing the leading nations.
While defeats to the teams from Down Under were not unexpected, Pakistan’s tame surrender to the hosts and the massive drubbing at the hands of archrivals India was a painful experience for hockey fans. Malaysia edged out the Greenshirts by a solitary goal, with Pakistan’s forwards missing nearly half a dozen goal-scoring opportunities. India handed Pakistan a 5-1 drubbing where the high-flying rivals drowned the national team in a deluge of goals. This was one of the heaviest defeats that Pakistan suffered in the marquee rivalry between the two countries.
It was clear from the onset that the players were plagued by fitness concerns, the penetration by the forwards in the opposition’s circle was entirely absent in most games and the defence was shoddy to say the least. Players like Rashid Mahmood, Mohammad Waqas, Rizwan senior, Ammad Butt, Umar Bhutta and goal-keeper Imran Butt have been playing top-class hockey for a considerable time now but are still found wanting when confronted with pressure situations.
Amid the depressing performances, the goal-scoring form of Arsalan Qadeer was an encouraging sign, with the youngster netting six goals in the group stage — the most for any player in the tournament before the playoffs. It is clear that Pakistan hockey has been in a shambolic state for a long time. Serious financial problems and subversive politics within the PHF have not made things easy, while outdated coaching methods and the seeming lack of will to find and hone fresh talent have compounded problems. The PHF needs to pull up its socks and start a major restructuring exercise of the sport in the country if Pakistan is to get out of this morass.