Australia clinched the Azlan Shah Cup in style, hammering India 4-0 in the final on Saturday while Pakistan finished in fifth spot after they cruised past Canada 3-1. 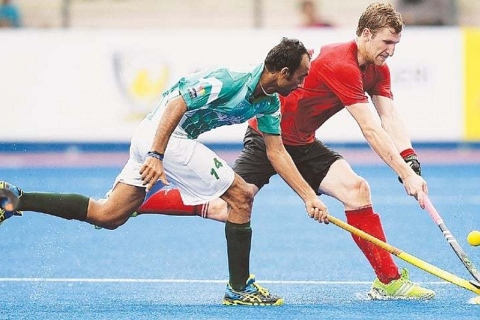 Australia clinched the Azlan Shah Cup in style, hammering India 4-0 in the final on Saturday while Pakistan finished in fifth spot after they cruised past Canada 3-1.

New Zealand’s title defence ended with a bronze medal after they beat hosts Malaysia 5-4 in a shootout following an exciting 3-3 draw.

The result meant Australia lifted the trophy with an all-win record.

For the reigning world champion and world number one, Craig opened the scoring in the 25th minute when he dribbled past a couple of Indian defenders and dragged goalkeeper Akash Chikte out before putting the ball into an empty net.

Craig doubled the lead when he lunged into a cross in the 35th minute for his fourth goal of the tournament.

It was the turn of Ghodes then to join the party as he scored two more goals to complete a convincing win against an opponent which was making its seventh appearance in the final of the event. Ghodes was playing in his 150th match.

Ghodes scored his first goal through a volley, while the second one came barely three minute before the final hooter, as the script refused to change with Australia continuing their denomination over seventh ranked India.

In the playoff for fifth spot, Pakistan took the lead in the 11th minute as Fareed Ahmad picked up the ball from a botched penalty corner stop to drill the ball home.

Ajaz Ahmad then made it more comfortable for Pakistan by scoring the second goal in the 27th minute, diving in to deflect a cross team-mate Tasawar Abbas.

Canada reduced the deficit in the 51st minute through Iain Smyrhe but Mohammad Arshad put the issue beyond doubt by converting a penalty corner in the 57th minute.

After a disappointing campaign which saw just two wins in the round-robin stage, Pakistan goalkeeper Imran Butt said the tournament was good preparation for his team before the 2018 World Cup qualifiers.

“It was nice to finish on a positive note and we will now go back home and improve on our weaknesses,” said Imran as Pakistan look to make it to the quadrennial showpiece after major disappointments over recent years as they failed to make it to the 2014 World Cup and the Olympics later this year.

Malaysia were two minutes away from a fairy-tale ending before it was cruelly snatched away by New Zealand in their match for third place.

With Malaysia leading 3-2 and time fast fading, Kane Russel fired home a last-gasp equaliser to make it 3-3 and take the game into a shootout.

National coach Stephen van Huizen was disappointed for the boys as “they had given their best in front of the home crowd”.

“After a hard game against India [6-1 defeat on Friday], we actually showed character against New Zealand. I’m actually very disappointed for the boys, we deserved the third spot,” he said.