Reigning world champions Australia clobbered India 4-0 to clinch the Sultan Azlan Shah Cup on Saturday, as the powerhouse eyes the top-spot on the podium at the Rio Games this summer. 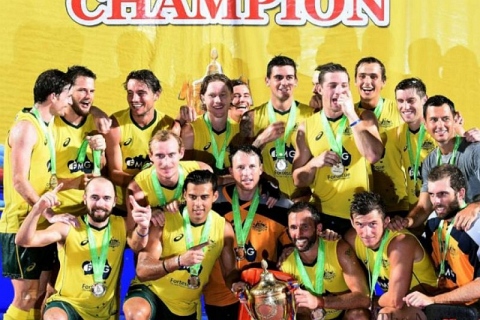 25th Sultan Azlan Shah Cup      Malaysia
Reigning world champions Australia clobbered India 4-0 to clinch the Sultan Azlan Shah Cup on Saturday, as the powerhouse eyes the top-spot on the podium at the Rio Games this summer.
The Kookaburras kicked off the final against seventh-ranked India with fast attacks and strong defence to the delight of the spectators in Malayia's Ipoh. Both teams rallied for an early goal but failed to earn a shot at the back of the net. However, as the game progressed, there was no doubt the Kookaburras were the dominant squad as India failed to defend against the skills and speed of the Australians.
The Kookaburras put pressure on the Indian defence and secured an inaccessible 3-0 lead by the end of the third-quarter break. Just before half-time, 20-year-old Thomas Craig put Australia ahead, by taking a crack at the left side of the Indian net leaving goalie Akash Chitke helpless. Craig was in action again in the 35th minute when he slid on his stomach to hit the ball past Akash. Matt Ghodes scored the other two goals including one on the reverse stick which saw the ball sail past the leg of the Indian goalkeeper.
India cruised into the final after defeating Malaysia 6-1 earlier in the week and edging out New Zealand. However, Australia's dominant performance on Saturday proved a wide gap remains between the two rivals. Australia ended the tournament with the maximum 18 points from six matches, while India earned 12 points and New Zealand finished with 11. Australia has won the Sultan Azlan Shah Cup a record nine times.
A happy Craig said after receiving the award: “Whenever we play India, it is always a tense affair. It feels good to get two goals. My team-mates were brilliant in this tournament but we all know this is just the first step. “There are lots of tournaments before the Rio de Janeiro Olympics and we will surely work hard to make sure we win the gold medal,” said Craig.
An elated Australian captain Mark Knowles said it was sweet to regain the trophy they lost to New Zealand last year. “Australians are highly competitive in every tournament as we want to win all the time. India were great opponents, kudos to them. “This is a good start for our Olympics preparation. We played against top class sides and we now know our strengths and weaknesses,” said Knowles.
Meanwhile, defending champions New Zealand defeated hosts Malaysia for the bronze medal in a 5-4 penalty shootout. In the day's other action, Pakistan finished fifth after outpacing Canada 3-1 in the classification match. Goals from Fareed Ahmed (11th minute), Ajaz Ahmad (27th) and Mohamed Arshad (57th) were enough to sink the Canadians. Although Canada came to life in the fourth quarter, Iain Smythe’s 51st-minute goal proved too little, too late.
Australia, India, New Zealand and Canada are among the 12 teams that are potentially set to square off in Rio in August. The Australian men's team has won nine medals, including one gold in 2004, at the Olympic Games.