Pakistan won the JR Jaywardene Golf Trophy against Sri-Lanka while Ghazanfar Mehmood stood tall, securing par 72 in the final round to win the 59th National Amateur Championship title at the Islamabad Golf Course. 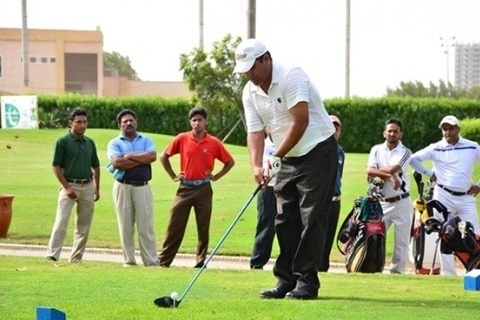 The leading amateur golfer went into the final round with four under 140 over days and maintained that score following a brief hiccup early Sunday morning and then recovering well to win the title.

Ghazanfar aggregated four under 212 for three days. The golfer from Rawalpindi had two bogeys going into the 12th hole, where he succeeded in carding birdie and on three-stroke hole No 14, he was seen sinking in long-range put to gain another stroke to go four-under on aggregate.

He finished the third round from where he started Sunday. Taimoor Khan had a poor last round where he was seen carding eight over 80 to finish on fourth ultimately. He got an aggregate of nine over 225 for three days. Zubair Hussain (223) carded 73 in the final to finish runner-up in the gross event with Tariq Mehmood who got an aggregate 224 managed third position.

Tariq, however, emerged winner in the net category meant for handicap players seven and under getting an aggregate 215 over three days. He was followed by Raja Muhammad Israr (218) and Salman Khan (220) for second and third positions, respectively.

Alamgir Shah (143) was the winner in the net category 12 and below senior category that was played over 36 holes. Qaiser Hussain (146) and Javed Ahmad Khan (148) finished second and third respectively.

Punjab got the top position with Federal Golf Association finishing as a runner in the seniors' team event (55 and above).

Pakistan had already won the international team event and JR Jayewardene Trophy which was played on the opening two days. Pakistan team was consisting of Taimoor Khan and Zohaib Asif.

After the first round was lost to rain on Thursday and the championship had to be reduced to three rounds from four rounds of competitive golfing, the first round brought refreshing news for Pakistan as the two-member Pakistani golf team comprising of Taimoor Khan and Zohaib Asif prevailed over the two-member Sri Lankan team consisting of Punith De Silva and Udesh Perera