Kumrat Snow Festival called off due to fear of coronavirus

The two-day Snow Sports and Culture Festival at scenic Kumrat Valley called off due to coronavirus and in light of the decision made by the provincial cabinet. 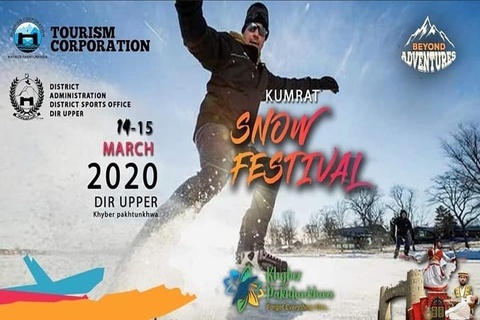 The two-day Snow Sports and Culture Festival at scenic Kumrat Valley called off due to coronavirus and in light of the decision made by the provincial cabinet.

This was said by DC Dir Upper Khalid Iqbal Khattak, while talking to media during his visit to tourist centre set up by Tourism Corporation, KP in the main Dir bazaar, a gateway to Kumrat Valley. He said they have taken the decision for the larger interest of the people albeit hundreds of spectators reached Kumrat Valley.

He said this year the district administration with the strong support of TCKP had made all arrangement for the smooth sailing but for the prevention and protection of the people it was decided to call-off all festival including Kumrat for this year.

He said it was for the first time that after other areas, Kumrat Valley has been selected to have winter sports besides awaking the people that Kumrat is an accessible event in winter as well. Accompanied with AAC Dir Upper Ijaz Akhtar, DSO Mukhtar Hussain said that according to the vision of Prime Minister Imran Khan holding of Snow Sports and Culture Festival is to provide a golden opportunity for the local and foreign tourists to visit and enjoy the pleasant atmosphere as fresh two-feet snowfall recorded last night which further added to the beauty of the scenic tourists spot in Kumrat luring extra-number of visitors who loved snow.

He said the previous year the event attracted a decent number of local and foreigner tourists and this year the numbers of the tourists were quite satisfactory despite snowfalls. He disclosed a tourist guideline desk was established on various points for the tourists. “We have done all things including purchasing of trophies, medals, certificates, uniform for players to be part of the event in multi-culture combination,” Mukhtiar added.

He said the event also needed heavy logistics, arrangements of food for athletes and tourists, accommodations, the opening of closed hotels in winters, removing snow from roads were some of the work done in time to make ensure easy access to the visitors. When contacted on phone, MD TCKP Junaid Khan said that Kumrat is one of the scenic sites in KP where a large number of tourists used to come to visit the valley in summer.

He said across the world precautionary measures have been taken and that govt of Khyber Pakhtunkhwa has also taken cogent measures in light of the Federal government decision. He said the people of Pakistan are brave enough and as they fought against insurgency and militancy, they would overcome on the coronavirus which hit the entire globe.