Forward S.V. Sunil scored two crucial goals as a dominant India registered their biggest victory over arch-rivals Pakistan in six years when they coasted to a 5-1 win in a round-robin league match of the 25th Sultan Azlan Shah Cup 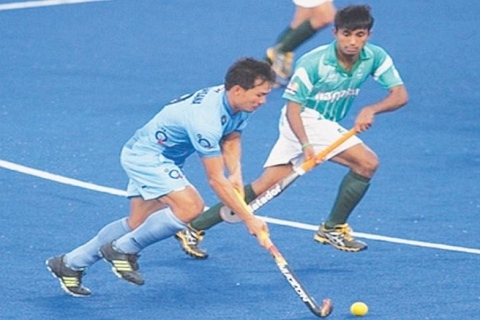 Forward S.V. Sunil scored two crucial goals as a dominant India registered their biggest victory over arch-rivals Pakistan in six years when they coasted to a 5-1 win in a round-robin league match of the 25th Sultan Azlan Shah Cup on Tuesday.

This was India’s biggest win since their 7-4 triumph against Pakistan in the 2010 Commonwealth Games at New Delhi.

Playing their best game of the tournament, Manpreet Singh opened the scoring for India in the fourth minute but Pakistan equalised in the seventh through captain Mohammad Irfan.

But thereafter it was all India as the Sardar Singh-led side controlled the proceedings with Sunil scoring two opportunistic field goals in the 10th and 41st minutes.

Talwinder Singh then capitalised on a rebound to score India’s fourth goal in the 50th minute before Rupinder Pal Singh converted a penalty corner in the 54th minute.

India’s victory would have been bigger had Rupinder converted a penalty stroke in the 55th minute and an deflection into the net by Ramandeep Singh in the 69th was not disallowed after the umpire initially blew for a goal.

The victory took India to the second spot in the round-robin league standings with nine points from four outings. The table is being led by world champions Australia on 12 points from four straight wins.

Australia took one step into the final when they prevailed 1-0 over Oceania rivals and defending champions New Zealand, who now have eight points from five matches.

The all-important goal for Australia was scored by captain Jamie Dwyer, who capitalised on a rebound to shoot into the open goal with the goalkeeper at his mercy in the 23rd minute.

New Zealand must now beat India in their final group match on Wednesday and hope that their other rivals falter in their upcoming matches if they are to make the final.

India play their final match against Malaysia on Friday.

India, coming into the match with three insipid performances, needed a win over their eternal rivals.

And in an exhibition of the sub-continental style of hockey, India lifted their game by leaps and bounds to dominate the match, forcing Pakistan to crowd their territory in the second half to deny Sardar’s men more goals.

India got off to a flying start with Manpreet picking up a short pass from Sunil on the left and shooting on target with a firm reverse drive in the fourth minute of play.

Pakistan responded strongly three minutes later by earning a penalty corner. The hit was blocked illegally and in the second attempt, Irfan’s 104 km/ph flick managed to beat a diving goalkeeper Akash Chitke on his right.

India’s reaction to the goal was quick. Manpreet was back in the thick of things as he drilled the ball into the Pakistan goal from the right that was deflected home from a point blank range by Sunil to make it 2-1.

The exhilarating first quarter meant that the crowd expected another fiery show in the next 15 minutes. But the second quarter was bereft of clear-cut chances.

Pakistan goalkeeper Imran Butt brought off a fine save when he leapt to his left to palm away a rasping drag-flick by Rupinder from India’s first penalty former in the 18th minute of play.

Rupinder was off the field, serving two minutes for a green card suspension, when Pakistan earned their third penalty corner, but Irfan’s rising drag-flick struck Manpreet on the knee and he had to limp off the pitch.

India continued with the momentum even though Pakistan threatened early after the break.

However, Sunil delivered a crucial goal at the important juncture. After receiving a pass from Kothajit Singh, Nikkin Thimmaiah squared pass for Sunil, who was lurking in front of the goal at the far post, to tap in with a diving effort.

Talwinder then picked up the ball from a defender’s stick to shoot on target for an opportunistic goal in the 50th minute before Rupinder’s rasping drag-flick ended in the net from a penalty corner four minutes later.

Manpreet later came back to earn India a penalty stroke, when he was tripped in the scoring zone, but Rupinder sent the flick straight into the goalkeeper’s pads.