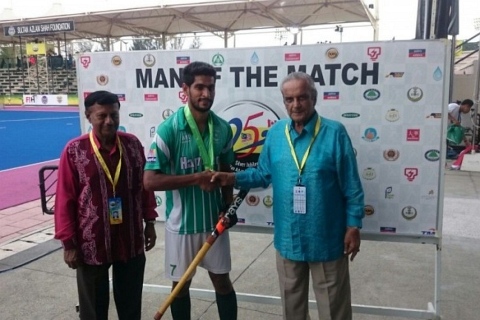 Former champions Pakistan banked on two goals from Mohammad Arslan Qadir to open their campaign at the Azlan Shah Cup with a 3-1 victory over Canada here on Wednesday.

In hot and humid conditions at the Sultan Azlan Shah Stadium, Pakistan came close in the opening two minutes but Mohammad Rizwan was unable to position himself well to deflect a cross by Umar Bhutta.

Arslan opened the account with a field goal in the 27th minute and converted a penalty corner a minute later to give Pakistan a 2-0 lead.

Canada then pulled one back through Richard Hildreth’s flash strike, but Mohammad Arshad capitalised on a 52nd-minute penalty corner to seal Pakistan’s victory.

“It’s a good start ... it will motivate the younger players for the coming matches,” said Pakistan coach Khwaja Mohammad Junaid.

“This tournament is important for us to gauge our performance as we’re building for the future,” added Junaid, with Pakistan having failed to qualify for this year’s Olympic Games in Rio.

“Our target here is to improve and learn from the others. We have a tough match next against Australia [on Friday]. We hope to keep them at bay and pull off another surprise.”

Asian Games champions India, meanwhile, came from a goal down to clinch an unimpressive 2-1 victory over Japan.

In the final game of the day, hosts Malaysia produced a spirited performance to hold defending champions New Zealand to a 3-3 draw.