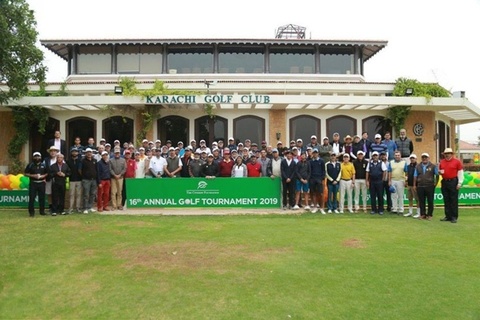 The Citizens Foundation (TCF) successfully organized the Annual TCF Golf Tournament, into it's 16th year at the lush green course of Karachi Golf Club. A total of four category competitions were held in the event in which, this year, more than 116 golfers forming 29 teams participated and played under the Texas Scramble Format to secure top spots by displaying some exceptional golfing skills.

Among several participating teams, Faysal Bank emerged as the winners of the tournament. They were followed on the runner up position by Selimpex International.

The main sponsors of the event were: Faysal Bank, Pepsi, Samba Bank, Bank Al Habib, and Habib Metro Bank and the other in-kind donors were: Rizwan Rasheed of Richa Leathers for gloves, Imran Gheewala of Selimpex International for T-shirts, Musadaq Zulqarnain of Interloop for socks, Yasin Kassam of Pakistan Beverages for cold drinks & water, Uniferoze for Saniplast and Abbot for Mospel.

At the presentation ceremony, prizes were distributed among the high achievers by Chairman and Co-Founder, Ateed Riaz.

The 16th Annual Golf Tournament witnessed the presence of various leading golfers of the city supporting TCF’s mission for education. The tournament was a fundraiser to help TCF raise support for afternoon school shifts in 5 villages across Sindh and give more children a chance to get quality education.