The 8th day shone bright for WAPDA, Sui Southern Gas Company, Customs and Punjab-A as they qualified for the semi-finals of the championship. 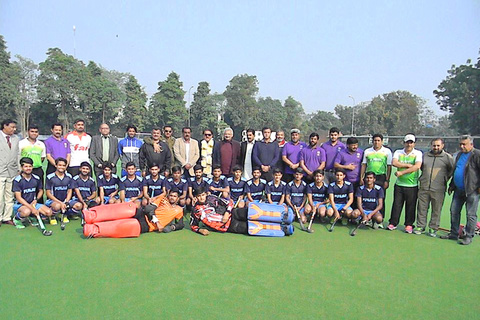 It was a busy day at National Hockey Stadium, Lahore as four matches of the last-8 round of 36th edition of National Junior Hockey Championship 2019 were played.

The 8th day shone bright for WAPDA, Sui Southern Gas Company, Customs and Punjab-A as they qualified for the semi-finals of the championship.

In the day’s most thrilling quarter-final, WAPDA edged out Khyber Pakhtunkhwa-A 1-0 with the solitary goal coming from Ali Bahadur.

Though KP-A fought well against a strong WAPDA side, their forwards failed to cash in on the chances they created. Ali put WAPDA ahead as he struck a field goal in the 17th minute. However surprisingly, both the teams failed to click the scoreboard in the remaining time of play despite clear chances for both sides.

In the other quarterfinal, two goals from Sami, including the winner in the 53rd minute, helped Customs earn a 2-1 victory against MPCL and book a place in the semi-finals.

After MPCL had earned an early lead through Arshad Liaqat who converted a short-corner in the seventh minute, Customs bounced back to equalise in the 40th minute, when Sami converted the first penalty-corner. He doubled the lead in the 53rd minute which MPCL could not reply to thus securing his teams spot in the semifinals.

Meanwhile, a brace from Rizwan Ali who scored on penalty-corners inspired SSGC to an impressive 4-0 victory against Port Qasim Authority in third quarterfinal. Rizwan struck back-to-back goals in the 42nd and 43rd minutes to steal the headlines. Earlier, Abdul Manan (33rd) and Adeel Latif (35th) chipped in with a goal each to ensure a comprehensive win for their side.

In last quarter-final, Mohammad Usman’s two goals guided Punjab-A to a well-earned 4-2 win against Army-A. With this victory, Punjab-A became the only team from the provinces to reach the semi-finals.

Usman scored his goals in the 3rd and 51st minute while Amir Sohail (5th) and Murtaza Yaqoob (57th) were the other scorers from the victorious side.

For Army-A, Muzammil Hussain (29th) and Mehran Ahmed (60th) scored the goals but could not prevent their side from crashing out of the tournament.