The Commissioner Karachi ATF U-14 Super Series tennis championship will be held in Karachi from Nov 10-16 at the Karachi Gymkhana. 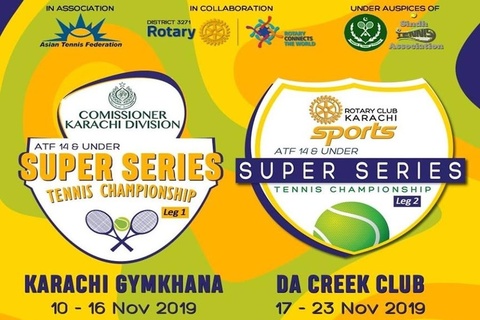 Commissioner Karachi, Iftikhar, will inaugurate the championship while chief secretary Sindh Syed Mumtaz Ali Shah will be the chief guest at the closing ceremony. Nemoz are the event manager while Sameer Shamsi is the tournament director and Khalid Rehmani is the Organizing Secretary.
DC South appealed to the print and electronic media to give good coverage to the championship which, he said, will send a positive image of the city and the country. He thanked the Karachi Gymkhana Administration and DIG Sharjeel Kharal for ensuring support and security arrangements for the players during the event.
Chief organiser Khalid Shamsi also spoke on the occasion and said the championship will be a big boost for the metropolis and exciting matches will be played.
Also present were Assistant Commissioner Fatima Bashir, coordinator Ghulam Mohammad, PTF vice-presidents Gulzar Feroze and Khalid Rehmani, Azmatullah Khan, media coordinator Mohammad Arshad and Nadeem Maazji.