Congratulations to Russia, who became the second winners of the International Socca Federation World Cup 2019, after a thrilling final in Rethmyno, Crete in Greece. 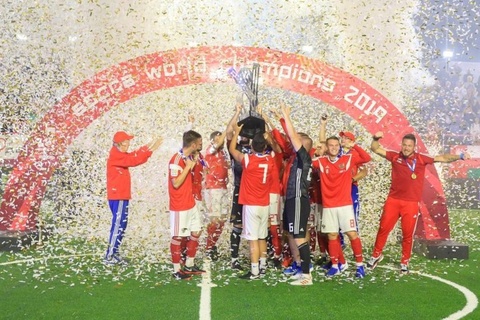 The Russians – fancied before the tournament after their superb showing in Lisbon last time out – beat Poland by the odd goal in five in front of a packed crowd in the Leisure Leagues Stadium, right on the banks of the Mediterranean Ocean.

The Russians were up against much hardworking side, Poland in the final after they defeated Greece to book their place in the final which they claimed at-last by struggling against the Polish team at 3-2.
While the Poles have now finished as runners up for two years in succession, having lost to Germany last time out. Maybe 2020 will be their year. But at least the hosts, who have given so much to the tournament, were able to earn the small consolation of third place, as they beat Moldova 2-1.
As far as Pakistan's team performance in the said tournament, the only good display from the side came against the world champions, Germany, who were thrown out of title race after Pakistan players put up a brave fight and conceded a close 2-3 defeat – which was not enough for the defending champions to stay in the run for the title.
It was then perhaps dubbed as the 'Greatest Night in Pakistan's SOCCA History' so far. This game was watched by a crowd of 3,000 spectacular fans at the Leisure Leagues Stadium in Rethymno, Greece.
While in earlier games, Socca Team of Pakistan fell short of stopping the Romanian behemoth in the second group fixture as the final score completely fell in favor of the opposing side that stood 0-5. Before this second defeat, Pakistan also lost its opening game against Slovenia by 1-5, facing a tough time.
International Socca Federation (ISF) organized the second edition of the six-a-side Socca World Cup that featured several talented nations around the world among which Pakistan was grouped with Slovenia, Germany, Hungary and Romania in Pool ‘H’.
Pakistani Socca Squad: Muhammad Ali, Shaban Hussain, Irfan Khan, Ali Haider, Kareem Keraye, Shahab Raza, Daniyal Mirza, Meeran Saifi, Affan Siddiqi, Habib Ur Rehman, Mohammad Waheed, Hassan Bashir and Yousuf Butt.
Team Officials: Syed Ishaq Shah (COO Leisure Leagues), Zabe Khan (Manager), Syed Sharoze Rizvi (Assistant Manager), Kevin Reeves (Head Coach) and Gohar Zaman (Coach).