Among several participating teams from Quetta and Mirpur, two regional winners have turned up who have now qualified for the regional finals which are to be held in Islamabad this month. 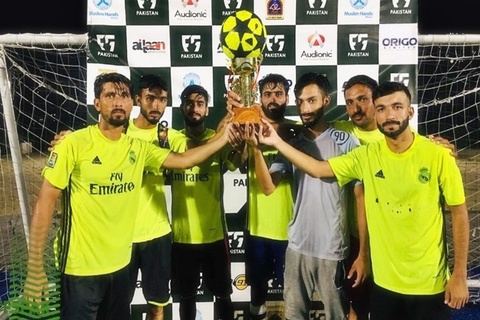 F5WC World Championship 2019 (Pakistan)      Total Football Ground
World’s largest 5 aside football tournament F5WC have taken Pakistan by storm from Karachi to Kashmir. The qualifying rounds in Peshawar, Quetta and Mirpur Azad Kashmir have been completed among which three teams have made it to the regional finals which would take place in Islamabad from 5th to 8th September.
During the qualifiers in Peshawar, Quetta and Mirpur Azad Kashmir, the emerging winners now stand as: PAK Afghan FC, Quetta Sports and Seri Friends, respectively.
Whereas, qualifiers for Islamabad, Lahore and Karachi, will take place from 5th to 21st September in attempt to find the best team in Pakistan.The winning team out of 300+ participating teams in this nationwide tournament will represent Pakistan in the finals being held in Cape Town, South Africa from 28th November to 2nd December this year.
It will be for the first time that Pakistan will be taking part in F5WC World finals where they will compete against 31 nations' teams including football giants like Brazil, Argentina, Spain, Denmark and Japan.
This proud moment for Pakistan is credited to Origo Limited for promoting Sports and football in Pakistan, to which Syed Farrukh Ali Qandhari, CEO Origo Limited said,

"We are extremely happy about the support and encouragement we have received from all the stakeholders at all stages. It gives us immense pride in representing Pakistan at worlds largest 5 aside football tournament. The popularity of F5WC in all cities of Pakistan shows the passion of youngster and footballers of Pakistan. Organizing and participating in such tournaments gives us a chance to promote local talent at international stage and also showcase that Pakistan is a sports and peace loving nation."