As many as 32 teams tried their best to become Peshawar region winner of F5WC World Championship 2019 (Pakistan) among which PAK Afghan FC stands as the title taker. 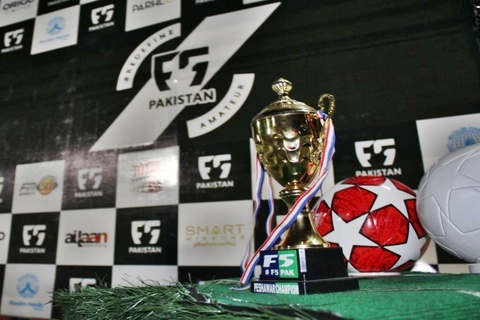 F5WC World Championship 2019 (Pakistan)      Total Football Ground
In 2019, Pakistan will be participating at the F5WC for the first time and to ensure the best team to represent Pakistan in this world's largest amateur football tournament, F5WC Pakistan have organized a nationwide tournament.
This nationwide tournament's first leg for the selection of a regional team was held in Peshawar where as many as 32 teams participated, players from whom were seen giving their all, competing against each other with all their might so as to become the regional champion but it was PAK Afghan FC who took home the final victory and now have qualified for the regional finals. They will go to Islamabad for the regional finals which are to take place from 5th to 8th September.
That nationwide tournament is engaging over 250 teams across Pakistan to discover one true Team Pakistan who will be the national flag carrier at the World Championship in Cape Town, South Africa.
This mega event have been in conduction since 2014 and was consecutively hosted by Dubai for two years whose winners stood the teams from Denmark and Morocco, respectively. Bangkok and Beijing had the honors to host it in its third and fourth editions whose final victories were taken home by Colombia and USA, in the respective years while the last year winner was Argentina, event being hosted by Cape Town and so will be this time.
The knockout round have already been conducted in Peshawar but there is still plenty of time left for the teams from Quetta, Islamabad, Lahore, Mirpur (AJK) and Karachi. Footballers from Islamabad will have a chance to prove their skills at the Total Football Ground on 15th September where the city champions (Islamabad, Lahore and Peshawar) will play each other in a play-off. One team will qualify and will get an all-expense paid trip to Karachi to play the F5WC Pakistan Finals on the 22nd of September.
While Karachi layers would have the opportunity to become a part of the final team on 21st September at Zamzama United Rahat Football Ground where The city champions (Karachi, Karachi Educational Institutes, and Quetta) will play each other in play-offs. One team will qualify for the F5WC Pakistan Finals on the 22nd of September.
For further information, queries and registrations, this E-mail and give cell phone number can be contacted: basalat@fhrholdings.com and 0321-2291663.