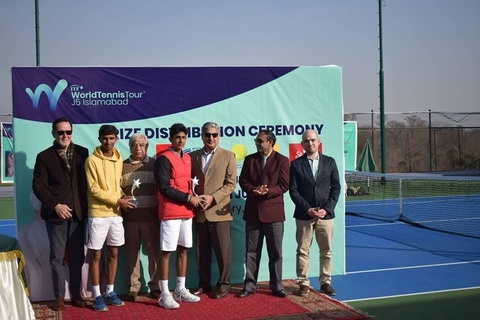 Syed Tajammul Abbas ITF Pakistan World Junior Ranking Tennis Championships 2019      Syed Dilawar Abbas PTF Tennis Complex, Islamabad
Top seed Huzaifa Abdul Rehman of Pakistan won the Syed Tajammul Abbas ITF Pakistan World Junior Ranking Tennis Championship-2019 boys’ singles title by beating 8th seed Bader Alabdullah of Kuwait in a one sided final played here at Senator Dilawar Abbas PTF Complex, Islamabad.
In the girls’ singles final, Aysegul Mert from Turkey clinched the title by defeating Arina Valitova of Russia in straight sets.
Huzaifa proved his mettle and demonstrated high quality tennis skills throughout the match. Huzaifa started first set by breaking the first two games of Bader and build up 3-1 lead. He continued his supremacy as he once again broke the 5th and 7th games of Bader to take the first set 6-1.
Huzaifa is a high performing junior player from Pakistan who has made a place in the ITF GSDF Division 1 event by performing exceedingly well in the Division 2 tournament. He is a young, energetic and ultimate talent for Pakistan.
In the second set Huzaifa again played excellent tennis and put the same pressure and led the 2nd set 4-1 by breaking the 2nd and 4th games of Bader. Huzaifa lost 5th game due to some unforced errors, but he came back strongly by holding the 7th game and broke the 8th game of Bader to annex the title.
This is the first international ITF Junior title won by Huzaifa and he is the first Pakistani after a decade to win an ITF junior’s title. The final was chaired by Shahzad Akhtar Alvi, ITF White Badge Umpire and the final lasted 1 hour and 10 minutes.
In the girls’ final, Aysegul Mert of Turkey proved too good for Arina Valitova of Russia. Aysegul started strongly and broke the first game of Arina and then did not allow her opponent to come back in the game to build up the winning 5-3 lead. She then broke the 9th game of Arina and wraped up the first set 6-3.
In the second set, she again proved her supremacy and broke the 2nd and 4th games of her opponent to build up mighty 5-1 lead. She won the second set and match by holding her game, which was seventh of the set. This was her first ITF Junior title. The final, which lasted 1 hour and 5 minutes, was chaired by Husnain Mehmood.
Muhammad Arif Qureshi ITF supervisor thanked the PTF, the ITA, the ITF and especially the foreign players for the success of this event. Salim Saifullah Khan, President PTF was the chief guest on the occasion. Senator Syed Dilawar Abbas, Patron PTF, Tariq Murtaza, President ITA, Brig Zaheer Akhtar, DG Sports Army, PTF management and dignitaries from the Turkish embassy were also present on the occasion.
Senator Abbas praised the players for their excellent display of tennis and the organisers for successful conduct of the event. He thanked ITF, sponsors, PTF, the law enforcement agencies and technical staff for their efforts. He also praised the efforts of PTF president for promotion of tennis in Pakistan.
Salim Saifullah Khan also appreciated the efforts of the organising committee, ITF and the PTF staff for successfully holding the event. He thanked the players and parents for coming to Pakistan and also requested them to come again in future.