KRL recorded their fifth win in the final of 12th Pakistan Premier Football League which concluded successfully yesterday at KPT Stadium in Karachi. 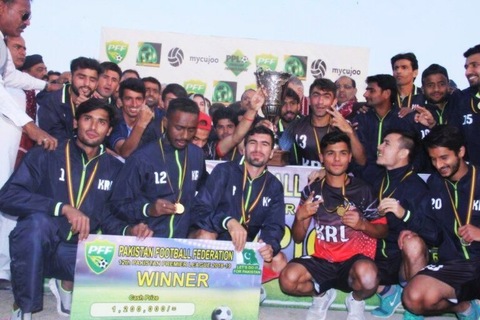 12th Pakistan Premier Football League      Qila Qasim Bagh, Multan, Punjab Stadium, Lahore, KPT and KMC, Karachi.
Khan Research Laboratories (KRL) team started at a whirlwind pace and the opponent team had to withstand a constant barrage of attacks right from the start.
KRL’s striker Izhar Ullah was the hero, finally earning his team the final victory in the league as he brilliantly slammed 2 goals for his team. Other members of the team contributed through a string of fabulous saves as the SSGC giants pressed to claw back at the score-line to turn the table in their favor but failed miserably as they were not able to goal a single time in the game.
Footballers from KRL enjoyed the bulk of possession which SSGC boys tried hard to take away to them but the players could not break down the hard-working KRL side.
Iftikhar Ali and Junaid Ahmed were two other KRL stars, making a number of great tackles plus attempts and finally got successful in making their way through the opponent’s net, first opening the scoring tally just at the 10TH minute while adding yet another goal at the 26th minute, respectively.
KRL needed a win by a margin of four goals to win the league while both KRL and Pakistan Air Force (PAF) finished the season with 51 points each. They were also tied on goal average which was 40 but KRL had conceded 12 goals, one less than PAF.
KRL had previously won the league in 2009-10, 2011-12, 2012-13 and 2013-14 while WAPDA have four crowns to their credit which they claimed in 2004-05, 2007-08, 2008-09 and 2010-11 season.
“It’s unbelievable,” KRL coach Sajjad Mehmood shared in great pleasure for his team’s win that,“I had told my boys that they must score a goal in the first ten minutes. They did that which put pressure on the opponents. We kept pressing them through counter-attacks that created rooms which were converted.”
Minister for Inter-Provincial Coordination (IPC), Dr. Fehmida Mirza, distributed the prizes among the winner team; KRL with Rs. 1.2 million and the second runners-up PAF bagged Rs. 900,000 whereas SSGC took Rs. 600,000 worth of cash prize.
Also, Rs. 120,000 each was handed over to Tanvir Mumtaz who proved himself to be the best goalie from KRL team with Mohammad Naeem being the best player scoring 13 goals and two hat-tricks belonging to PCAA team. And Ansar Abbas of Army was declared the leading scorer with his 15 goals in total throughout the league.
Pakistan Premier Football League made a return after more than three years long gap which featured 16 teams that were seen battling against each other to win the trophy if the league. Pakistan Football Federation (PFF) had increased the number of participating teams from 12 to 16 to make the event more competitive and to give more teams and players a chance to be a part of Pakistan top division.
Following were the participating teams: