Navy won over NBP 1-0 while WAPDA and K-Electric played a 1-1 draw in the yesterday matches played into Pakistan Premier Football League 2018-19 which is being held at KPT and KMC stadiums in Karachi. 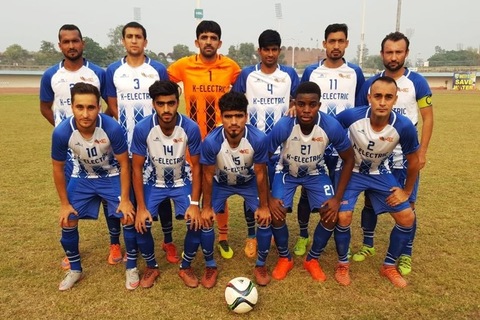 12th Pakistan Premier Football League      Qila Qasim Bagh, Multan, Punjab Stadium, Lahore, KPT and KMC, Karachi.
The first match into the day saw Pakistan Navy and National Bank of Pakistan (NBP) teams competing for the win but till the very last minute of the game, teams from either side were not to score at all.
For a long time it looked as though Navy team was going to suffer another defeat or might as well the match results in a draw but the players have now beaten the opponents and earned Navy a dramatic 1-0 win in Karachi.
Naveed Ahmed gave Navy a well deserved lead in the injury time and eased to victory. However NBP team also fought their way into the game but even through their strong smashes and strucks at the opponent goal post, as they were all well defended by the winning team’s players, the team was not able to mark their win in the match.
Whereas the other match saw WAPDA and K-Electric players held in a 1-1 draw. Muhammad Riaz gave K-Electric quiet an early lead in just 1 minute into the game and for much of the match it did seem like K-Electric will be winning yet again even without scoring any more goals but Ahmed Faheem scored at the 60th minute for WAPDA and equalized the score-line on 1-1 and from then on both the teams were unable to record anymore goals thus finishing the match as a 1-1 draw.