PAF completely scourage Baloch FC by 5-0 and KRL beat PCAA 1-0 in the yesterday matches played into the last phase of Pakistan Premier Football League 2018 which is being held at KPT, KMC and KB stadiums in Karachi. 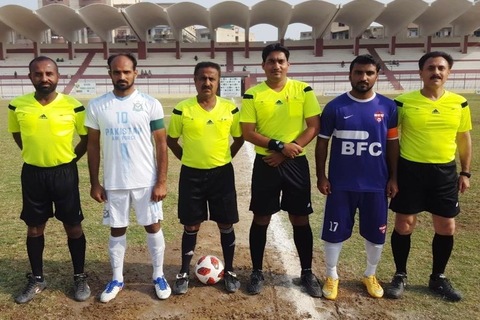 Pakistan Air Force (PAF) team caused great trouble for Baloch Football Club team when they stole the win from them by a huge margin of 5-0 score.

Inspiring performance from Mujahid of PAF was seen right from the opening minutes of the game when he slammed the ball right into the opponent net in the 11th minute to which Baloch FC boys did not manage to score in the entire first half.
PAF again scored through Irfan Ali at the 56th minute to further enhance their score-line to 2-0 goals and Mansoor then scored right after 2 minutes to the second goals making it a 3-0 lead. Baloch FC’s side was miserably failing to the strong wind-up tactics of PAF team that made heavy tackles and did not let them score at all throughout the game.
But the 3-0 lead still did not seem enough for PAF men as they did not hesitate to make it 5-0, first by Muhammad Faisal in the 63rd minute who netted past the ball into the back of the enemy goal post by passing through severa approaching footballers from the rival team.
Yet, again Mansoor Khan scored at the dying moments of the game and earned his team this spectacular victory of 5-0 goals making Baloch FC suffer heavy loss of the game.
While Khan Research Laboratories (KRL) struggled hard to win against Pakistan Civil Aviation Authority (PCAA) recording a 1-0 win through their hero for the match, Umair Ali’s 23rd minute goal, in the second clash of the day.