The 12th edition of Pakistan Premier Football League is continued in full swing with WAPDA recording the recent win over Baloch FC Noushki at KMC stadium in Karachi. 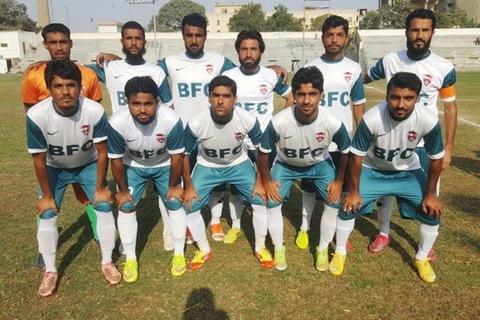 12th Pakistan Premier Football League      Qila Qasim Bagh, Multan, Punjab Stadium, Lahore, KPT and KMC, Karachi.
WAPDA Football team scored their all three stunning goals to subdue the losing team into causing them enough damage of losing the game and made their players face the challenges tougher and tougher to them.
The winning team took the lead just 12 minutes into the game when Zubair Qadeer shot deflected the opponent’s goal keeper and made it to the net. To which the losing side sat back in the entire match.
Losing team, coming through at times did try to make their way to the opponent team’s goal post but could not quite find the decisive final touch as the winning team’s goal keeper denied all their attempts by tackling the ball just fine.
The boys of the winning team were in good shape that helped them carry on the path and flow in which they were playing as their other two players; Arbab Basit and Adeel Ali slotted two more goals, one at the 23rd minute while the winning goal much later into the second half and made sure to earn their team victory of this match.
WAPDA coach, Tanvir Ahmed said that they could have pressed for the crown had they not been given tough matches in the beginning. Their team played good football this season. But in the start we were given tough matches which unsettled them.
“In Karachi we faced strength issue. We lost to PCAA and SSGC as six of our leading players had been engaged with the Pakistan team besides our coach Mohammad Habib, he added.
Now WAPDA has moved to 44 points with one game in hand while Baloch FC is reeling at 6 points from 25 games.
Today, former two-time winners Army will take on K-Electric in the first game while Sui Southern Gas Company (SSGC) will compete against Navy, starting from 03:00 PM onwards at KMC and KPT stadiums.