SSGC marked a 1-0 win over KPT in the yesterday match played into the last phase of Pakistan Premier Football League 2018 which is being played at KB, KPT and KMC stadiums in Karachi. 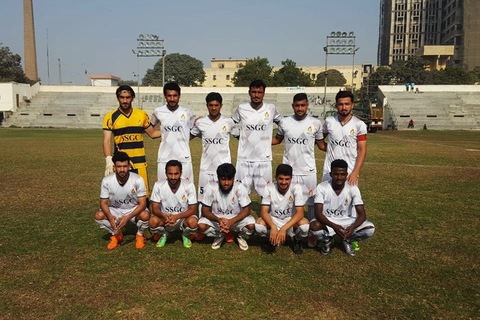 12th Pakistan Premier Football League      Qila Qasim Bagh, Multan, Punjab Stadium, Lahore, KPT and KMC, Karachi.
Sui Southern Gas Companies (SSGC) and Karachi Port Trust (KPT) football teams battled against each other in the recent match played into the league in which SSGC boys earned their team a hard-fought victory on 1-0 score-line.
SSGC boys continued their perfect run and did not let the opponent team players take the ball keeping the ball possession to their own feet. Amazing cheers louds were heard by the spectators as SSGC team took the game from their opponents at the 53rd minute.
However, KPT men did show good game play with defending their goal post not letting the SSGC players attempts pass through but in the second half, most of the action was concentrated at the losing team’s end of the pitch as Muhammad Lal was seen going close with a perfect ball land in the opposite goal post.
SSGC team from then on continued to pile the pressure on KPT footballers who only got out of their threat sporadically as the winning team were up to the task, saving their post to not let them score at all.