PCAA stunned KPT 5-2 while SSGC won over Afghan FC 2-0 in the yesterday matches of Pakistan Premier Football League 2018 which is being played at KB, KMC and KPT grounds in Karachi. 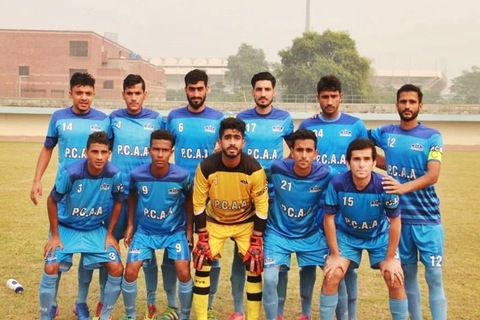 Pakistan Civil Aviation Authority (PCAA) squandered a five-goal lead in the first match played yesterday at KPT Football Stadium to see their Premier League title hopes rise with their every attempt turning into goals to which they won the match. Whereas Karachi Port Trust (KPT) team suffered a severe blow which left the players in shock as they lost the game by a difference of three goals.

Muhammad Waheed was the star player for the winning team as he scored a hat-trick in this game with his great foot skill, 1 in the first half while another at 45+4 minutes. He also slotted the 3rd goal much later in the second half. While Muhammad Naeem’s 59th minute goal and Muhammad Bilal’s 65th minute goal also contributed in the big win for PCAA team.
However, KPT’s side looked to be maintaining the pressure and reduced their zero goal line-up by adding the first goal for their side at the 55th minute netted by Naveed Gul and another by Muhammad at the 70th minute but till the end of the game, KPT team did not manage to score anymore goals as PCAA boys confronted their every attempt with all their efforts at blocking and defence on the ground.
Whereas in the second encounter, Sui Southern Gas Companies (SSGC) and Afghan Football Club were being witnessed clashing at the win. SSGC’s players earned the lead first time into the game through their first goal registered by Habib Ur Rehman in the 27th minute and then Muhammad Tahir put the winning team in complete command as he came forward in search of more goals and succeeded at the 64th minute, landing the ball past several opponents right into the enemy net.
To this strong game-play, Afghan FC Chaman’s team fragile defence collapsed completely as they faced serious pressure and witnessed the winning team’s players going wild with their win of the game.