Afghan FC overpowered PAK CAA 0-1 in the match played yesterday into 12th Pakistan Premier Football League which is being held at KB, KMC and KPT grounds in Karachi. 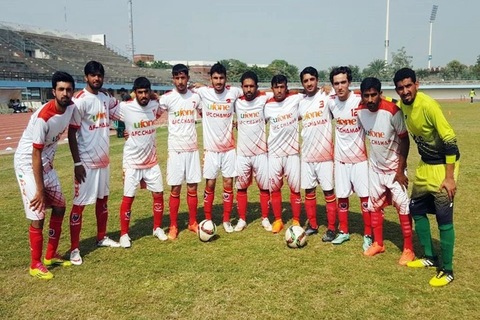 Afghan FC Chaman made Pakistan Civil Aviation Authority (PCAA) team suffer the loss of another game by defeating them on a close call of 1-0 score.

A tough fight was witnessed with both sides doing their best and after a barren but action-packed first half, Umair Yonus put Afghan Football Club ahead in the 65th minute as the boys of the winning team managed to resist the blocking of PCAA team and started with their attacks and powerful game.
The players of Afghan FC were not yet giving up and after their late first goal into the game, they kept the lead through the match and ended it with recording their seventh (7th) win in the league.
PCAA football team exchanged many passes and made several attempts at Aghan FC’s goal post but they all went in vain due to the winning team’s players strong defence and goal keeping being too strong which drove them downwards to lose the game at the end.
However, although it was quiet an amazing performance by Afghan FC but their two players namely: Muhammad Essa in the 32nd minute and Hikmat Ullah at the 61st minute were warned by a yellow card warning each, for foul play in the game.

Currently the top three (3) teams of the league: