NBP trashed Baloch FC 5-0 while SSGC crushed K-Electric 3-0 in the Karachi phases matches played into the 2018 Pakistan Premier Football League which is being held at KMC, KPT and KB grounds in Karachi. 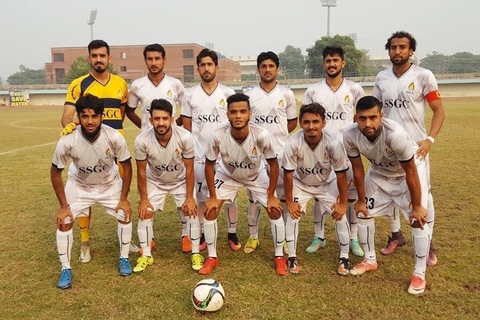 12th Pakistan Premier Football League      Qila Qasim Bagh, Multan, Punjab Stadium, Lahore, KPT and KMC, Karachi.
National Bank of Pakistan (NBP) and Baloch FC Noushki teams were up against each other in the first match of the day in which NBP players came out much stronger as they completely wiped out the opponent team on a 5-0 score.
Sher Ali incredibly scored 4 goals for the winning team, 2 in the first half while other 2 in the second half along with one goal contributed by Misbah in the dying moments of the game and earned their team the successful win in the match.
NBP coach Nasir said,“I am very happy with the way my team played today, “Sher Ali has done a wonderful job. I am satisfied with the way the team is performing. A good combination has been seen and I am confident we will fight for the top slot if we are able to perform against WAPDA, Pakistan Air Force (PAF) and K-Electric in our future games,”.
Despite the opponents having enough time to equalize as well as to score above NBP team, they did not make it to their goal post and all their attempts were made to go in vain as boys from the winning team defended their goal post well.
Whereas in the second encounter, K-Electric boys were facing much pressuring from the winning side which made them frustrated throughout the match. SSGC’s Bilawal Ur Rehman broke the deadlock in the 35th minute through brilliantly finding the back of the opponent’s net.
From then on SSGC team began their defensive game as boys from the losing side several times came close to their goal post but SSGC men did not allow them to score at all either through their goal keeper or the defender.
Jadeed Khan and Abdul Salaam scored two more goals for SSGC in the 44th minute and 61st minute respectively making their team register a convincing 3-0 win over K-Electric team. It was a stunning win over SSGC because K-Electric team is one of the strongest standing team currently in the league.