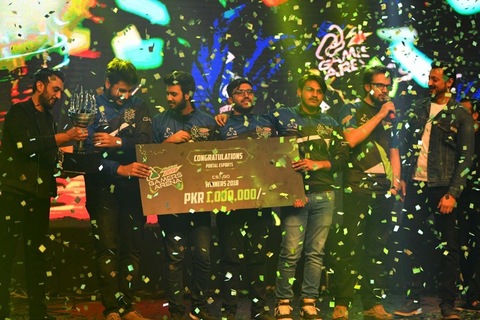 Portal Esports, one of the leading gaming organisations in the country, had two of its teams make it to the finale. The organisation managed to bag the grand trophy and prize money worth Rs1 million for both DOTA 2 and CS:GO in the  Dew Gamers Arena 2018.

In the final moments of the tournament, the players on the qualified teams who made it this far fought boldly and fearlessly for the coveted trophy and the Rs.1 Million prize pool. Portal E-Sports was crowned the champions for CS GO and Dota II title. Both teams were handed over Rs 1 Million rupees cash prize along with trophies by PepsiCo’s Marketing Director Salman Butt.

“You don’t know whether you will win or not, but the moment you win is the most beautiful moment of your life, you forget about the world!” exclaimed Musavir, also known as Ghost Khan, while talking about his team winning the DOTA 2 final.

Markhor secured the Runner up spot of the CS GO while the Promethus team seal the second spot of Dota II in the Dew Gamers Arena 2018.

This was not just a win for these teams, but a historical moment for e-gaming in Pakistan and a nationwide cause for celebration. Big names of the industry and iconic celebrities like Feroz Khan, Iqra Aziz, Uzair Jawal, Mahenur Haider, Mikaal Zulfiqar and Cybil Chaudhry were seen at the event showing their enthusiasm for gaming and congratulating the teams.

The event ended with a great performance by the band Strings. As the crowd went crazy swooning over their tunes, one couldn’t help but wonder if this was the beginning of events holding such grandeur in Pakistan.

I'd say Pakistani teams have done the hard work and sacrificed quite a bit to get to where they are today. Looking at such enthusiasm and talent, one would hope to see them competing on international levels too.

Mountain Dew launched its first ever gaming platform in collaboration with the internationally leading gaming giant, ESL. Mountain Dew Gamers Arena was the biggest gaming championship in Pakistan with prize money of Rs1 million up for grabs from 19th October – 31st December. Top gamers from Pakistan competed against each other in CS:GO and Dota 2 for the title of the best gaming team in the country.

To provide recognition and platform for the striving gamers of Pakistan, Mountain Dew aspired to change the format of gaming in the country. The beverage company settled up the stage for Mountain Dew Gamers Arena, the biggest ever gaming championship of Pakistan.