Pakistan lost to Bangladesh 2-3 in penalty shoot-out in the final of SAFF U-15 Men’s Football Championship which was being played at ANFA Complex in Kathmandu, Nepal. 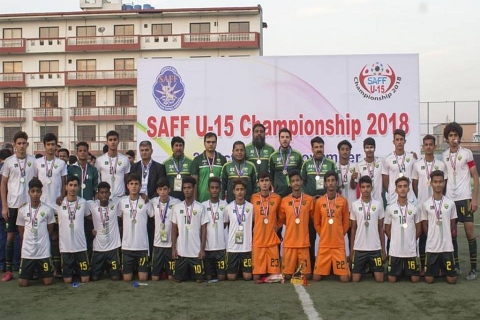 Pakistan managed to secure the runner-up spot claiming silver medal as the lost to Bangladesh 2-3 in penalty shootouts.

Bangladesh boys earned their team the victory in the championship through moving ahead in the 25th minute by Nazm Ul Ahmed Shakil who earned his side a throw-in, followed by a corner taken from where Pakistan defender and Captain of the team Haseeb Ahmed Khan headed the ball into his own net. It was much of the bad luck for Pakistan team as the let the Bangladesh side gain benefit but soon equalized the score-line nine minutes into the second half after defender Helal Ahmed gave away a penalty.
Bangladesh yet again tried to avail the chance to move ahead again in the 74th minute but this time, Uchchash’s header from a Ebne Ahad Sakil’s corner was saved by the keeper.
Apart from Mehedi’s three saves, Towhidul Islam Hridoy, Mohammad Raja Ansari and Mohammad Rustom Islam converted their chances in the shootout while Mohammad Rajon Hawlader and Mohammad Rabiul Alam bungle their lines.
From Pakistan, Junaid Ahmad Shah and Adnan Justin missed the first two penalties and later Mohib Ullah and Wasif successfully converted their penalties but unfortunately, Mudassar Nazar missed the last one due to which Pakistan lost 2-3.
Meanwhile, India defeated hosts Nepal 1-0 claiming the third-place in the championship.
Pakistan team captain Haseeb Ahmed Khan was named the Most Valuable Player of the Championship and Pakistan FIFA Refree Ahmed Rauf receiving was awarded by SAFF General Secretary Anwarul Haque. Ahmed Rauf Officiated Several Matches in 2018 SAFF U-15 Championship. While Nihat Jaman Uchchash of Bangladesh won the top scorer of the tournament award whereas besides winning the championship trophy, Bangladesh also earned the fair-play award. It was Bangladesh’s second title in five editions of the competition with the last one being the SAFF U-16 Championship.
However, Pakistan had also won the SAFF U-15 title in 2011.