Pakistan thrash Nepal 4-0 to advance into final of SAFF U-15 Men’s Football Championship 2018 which is being played at ANFA Complex in Nepal. 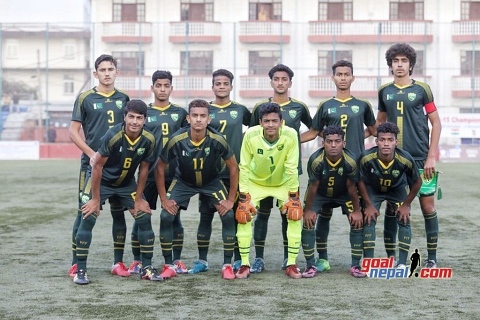 The men in green put up a stronger show in the second semifinal of the day as Pakistan thrash host Nepal by 4-0 playing under the Brazilian coach Jose Portella to advance into final of SAFF U-15 Men’s Football Championship 2018 which is being played at ANFA Complex in Nepal.

After a goalless first half in which Pakistan dominated possession and chances, a Nepal owngoal opened the floodgates.

Last time Pakistan won an international event  in 2011 during the SAFF U16 Championship, where they beat India 2-1 to win the trophy.

Pakistan kept their aggressive display as Mohib Ullah then scored two  fantastic penalties to further enhance the lead at 3-0 with Nepal going down to 10 men.

Following a flurry of rallies from either wings,Mudassar Nazar wrapped it up with a header at the end to make it 4-0 and secured berth into the final of mega event.

Earlier, Pakistan defeated defending champions India 2-1 in their opening match of Group B on October 25, and went on to outclass Bhutan 4-0 in the group of three to qualify for the semi-finals.


In the first semifinal Bangladesh defeated India 4-2 on penalty shootout to book berth into the finals of the SAFF U15 Championship 2018.


Now Pakistan will face Bangladesh on 3rd November at 14:30 PST in the final encounter.