Pakistan thrashed Bhutan 4-0 marking a consecutive win in SAFF U-15 Men’s Football Championship which is being play at ANF Complex in Kathmandu, Nepal. 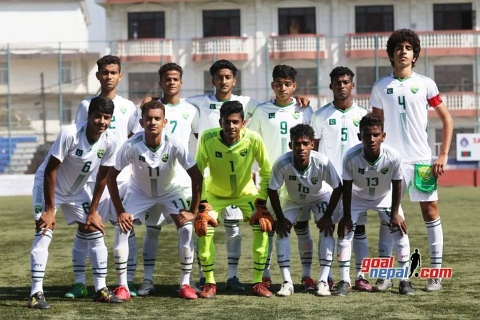 Pakistan completely wiped out Bhutan on a 4-0 score-line and confirmed the top spot in Group B, also qualifying for the semifinals of the championship.

Pakistani players came into the game with confidence as they sealed a memorable win by slotting past the opponent; Bhutan making it a convincing 4-0 victory.

Pakistan was already leading the game at the end of first half as Mudassir Nazar took control early on in the match netting the very first goal in the 20th minute. The winning team kept the ball possession often and gave almost zero chances to the losing team to score at their goal post in both halves. Moin Ahmed proved the most beneficial for the team, scoring twice in the game to earn victory for his team. Whereas Pakistan’s youth product Iftikhar Ahmed also contributed in this huge win by hitting at the opposite post in the 23rd minute.

Adnan Justin also gained a free kick later in the dying moments of the match and seemed certain to convert it in another goal to make it a 5-0 win for Pakistan but was not able to do so and missed the penalty eventually finishing the match as a 4-0 win.

Much of an astonishing performance was showed by Pakistani players who sealed yet another victory in the championship by trashing Bhutan’s football team on 4-0 claiming an easy win.