India bows to Pakistan on 1-2 in a thrilling match of SAFF U-15 Men’s Football C’ship which is being played at ANFA Complex in Nepal. 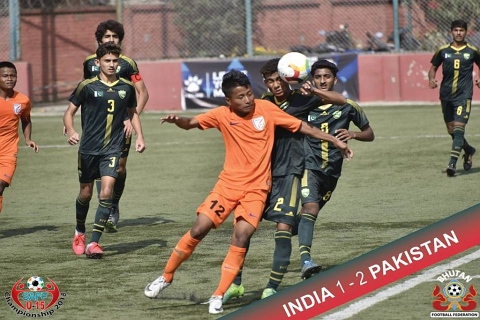 Pakistani players got successful in beating the traditional rival team India on a 2-1 score-line as the players displayed a much better performance in their foot-work and took control of the ball creating a goal opportunity in the 30th minute to which Pakistan’s Adnan Justin found the back of the Indian net from close range and slammed the very first goal in the game.

The Indians, also started the match on an attacking note and dominated possession as their players were also seen launching themselves at the ball and attempting to goal for their side to which Thlacheu Vanlalruatfela broke free of the Pakistani defence and latched onto a through ball, equalizing the score-line in the 53rd minute on 1-1.
Click here to watch the full match:

Pakistan side looked slightly more solid after the goal from India’s side and brought more effort in their play. Pakistani footballers did not give any space to India to come through and doubled their lead in the 85th minute through Washif who brilliantly netted yet another goal and claimed the win of the game.
This is one of the most unforgettable win for Pakistan as they defeated the arch rivals India in a thrilling 2-1 match. Pakistan will now compete with Bhutan in their second group B match on 27th October at 09:45 AM Pakistan Standard Time.