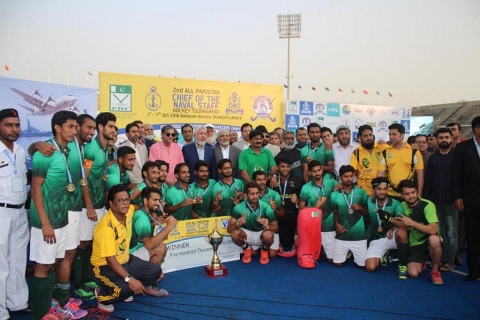 2nd Chief of Naval Staff All Pakistan Hockey Tournament 2018      National Hockey Stadium Lahore
The National Bank of Pakistan (NBP) beat Wapda in the penalty shootout, after the the match ended with a 4-4 draw, to win the CNS All-Pakistan Hockey Championship final here at the at the National Hockey Stadium.
The final presented an exciting duel between two of the country’s top sides in front of a charged and sizeable holiday crowd. Thrice did NBP go two goals ahead, but each time WAPDA reduced the margin to one.
Eventually, with just two minutes left, WAPDA made it 4-4 to send the match into shootout. Even in that phase, both teams’ scores remained equal.
NBP made good inroads during the initial moments of the match. In the third minute, Bilal Qadir squandered a good chance with a poor shot. Four minutes later, he made amends by putting his side ahead with a good finish off a fine move.
Within two minutes, a NBP forward was felled in the Wapda circle. The resulting penalty stroke was calmly converted by their captain Ammad Shakeel Butt, who wrong footed the goalkeeper to score.
A never-say-die approach helped Wapda reduce the margin in the 17th minute. A swift left side move culminated in Ajaz Ahmed flicking the ball in.
But just three minutes later, NBP restored their two-goal advantage. A brilliant aerial ball covering more than 50 metres was collected well by Dilber near the Wapda circle who put it past the onrushing goalkeeper. It was 3-1 at halftime in favour of the NBP.
The third quarter saw spectacular hockey at a fast pace.
Just two minutes after the restart, an electrifying Wapda raid rattled the bankers’ defence and Irfan Jr slotted in from a close range to make it 3-2.
In the 43rd minute, Abubakr made it 4-2 converting his side’s first penalty corner with a perfect high flick.
Vice Chief of the Naval Staff Vice Admiral Kaleem Shaukat graced the cermony as chief guest and distributed the prizes among the winners and top performers.The winners were awarded with a Rs 500,000 cash prize while Wapda received consolation through a Rs300,000 cash award.
Sui Northern Gas Pipelines (SNGPL), who finished third in the tournament were awarded with Rs200,000.
Player of the Tournament Rashid Mahmood (Navy) got Rs50,000, top scorer Aleem Bilal (WAPDA) Rs25,000, and the best goalkeeper Rana Umair (SNGPL)were awarded with  Rs25,000.
Vice Chief of the Naval Staff, Vice Admiral Kaleem Shaukat was the chief guest on the occasion and witnessed the match with keen interest. Also present on the occasion were Pakistan Hockey Federation (PHF) President Brig (R) Khalid Sajjad Khokhar, Secretary Shahbaz Ahmad Senior and officials of Punjab Hockey Association (PHA).