Sui Northern Gas Pipelines Limited defeated Navy to become the fourth team to qualify for the semifinals of the Second Chief of Naval Staff All Pakistan Hockey at the National Hockey Stadium Lahore. 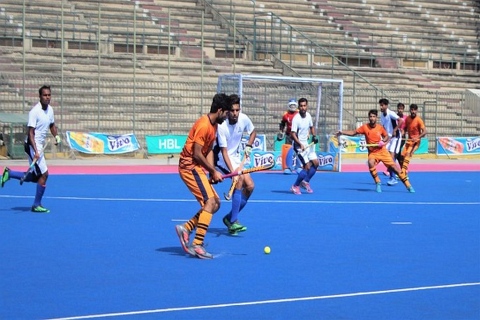 2nd Chief of Naval Staff All Pakistan Hockey Tournament 2018      National Hockey Stadium Lahore
On the last day of the pool fixtures, three matches were played. In the match between SNGPL and Navy, the two sides were equal on points and goal difference, but SNGPL, ahead on the number of goals scored, needed only a draw to move into the semifinals.
In the first match of the day, SNGPL squeeze into CNS Hockey semifinals as they defeated NAVY by 3-1. The two sides were equal on points and goal difference. But SNGPL, ahead on the number of goals scored, needed only a draw.
In a well contested first quarter, both entered the opposing circle quite a few times, occasionally testing the net minders and each earned a penalty corner. Navy couldnt avail while the SNGPL made their count. Mohibullah sounded the board.
Navy completely dominated the first seven minutes of the second quarter.They had a number of circle penetrations but couldnt make a dangerous attempt.
With most of the naval men up front, SNGPL cashed in on two quick counters. First resulted in a PC in the 23rd minute. A deceptive drill saw the ball reaching Suleman in the mid circle who doubled the advantage.
Two minutes later, Imran received a pass outside the Navy 23 metre with only goal keeper in front.After entering the circle, he took some time before finding the target.
Navy required four goals in the next half hour; few gave them any chance. But Asif Ali rekindled their hopes with a 32nd minute goal. It resulted from a good move coupled by a defensive blunder.
An interesting duel followed. Navy trying to break the opposition’s defence with quick raids and SNGPL fast on turn overs. Opportunities including penalty corners came to the two sides but the scoreline remained intact after 60 minutes.
In the second encounter of the day, Wapda outclassed SSGC 3-0. Two teams had already qualified for the semifinals and only contested for the bragging rights. WAPDA enjoy the services of a number of established members of the national team. SSGC have mainly young senior and junior internationals.
Match began with both the two sides making early raids.After wasting a good opportunity, WAPDA went ahead in the 10th minute when M.Irfan Jr found the target with a top of the circle strike.
The experienced electric men held upper hand over the gas men most of the time and created far more chances but couldnt add to the score when the third quarter ended.
However, in the last 15 minutes, they managed two goals.In the 48th minute, Ajaz’s reverse push off a left flank pass went into the SSGC goal via an opponent’s stick. A few minutes later, Shajeeh Ahmad beautifully controlled a long ball near the circle before thundering it into the tin.
The match between PAF and Police  had little significance as the two side were already out of contention for the last four.Nevertheless, it turned out into a good competitive encounter.
Police struck early when their captain Atif netted in the 5th minute. Promising Murtaza Yaqoob, grand son of late Afzal Mann (Olympic silver medallist 1964), made it 2-0 in the 22nd minute, also through an open play goal.
The defenders of sky fought back well. First, Mushtaq reduced the margin on a penalty corner.And it was all even by the 34th minute when Amjad Rahman equalised via a field goal.
The two sides tried hard to gain supremacy in the remaining time but it ended 2-2.