National Bank, SSGC & WAPDA defeated their respective opponents on the second day of the Chief of Naval Staff All Pakistan Hockey at the National Hockey Stadium Lahore. 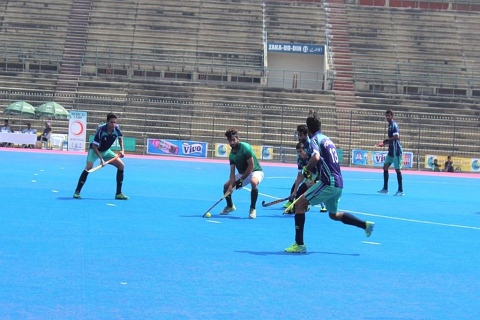 2nd Chief of Naval Staff All Pakistan Hockey Tournament 2018      National Hockey Stadium Lahore
National Bank, SSGC & WAPDA defeated their respective opponents on the second day of the Chief of Naval Staff All Pakistan Hockey at the National Hockey Stadium Lahore.
Mubashar Ali lead SSGC to register victory against PAF by 2-1 . Earlier  PAF routed 1-8 by WAPDA on the opening day were again underdog against the strong Sui Southern Gas Company, who along with WAPDA and National Bank, are strong contenders for the title.
SSGC went up 2-0 in the 19th minute thorough penalty corner conversions by Pakistan’s ace drag flicker Mubashar Ali. It seemed PAF again faced a big defeat.
The air force men survived a number of gas men’s attacks. SSGC’s cause was also not helped by a lot of missing in the circle. In the last quarter, PAF, probably due to good physical conditioning, had more of the possession.
When Adnan Haider reduced the margin to the bare minimum in the 50th minute through a field goal, it was all to play for. PAF tried their best to find the equaliser but couldn’t succeed.
In the second match, Port Qasim Authority who lost to SNGPL yesterday put up a resolute fight against the National Bank of Pakistan by 3-1, the reigning national champions.
There was no goal in the first quarter. In the 20th minute, PQA surprised their more experienced opponents when Tall Ammar availed the first penalty corner of the match with a high flick into the top netting.
That seemed to be a wake up call for the bankers. They controlled the game for the rest of the quarter earning five penalty corners, one of which resulted in penalty stroke. Skipper Shakeel Ammad Butt sent the goal keeper the wrong way to make it 1-1.
NBP maintained their ascendancy during the third period adding two more goals. Abubakr’s superb long diagonal pass from the right side was easily put in by Bilal Qadir standing close to the opposite pole.
In the 45th minute, Dilber applied the finishing touch to a swift move. In the fourth quarter also NBP had more of the play though PQA had their moments including two PCs but the scoreline remained intact.
The powerful WAPDA had a second big victory in as many days. After demolishing PAF 8-1 on Monday they had an even bigger win over the hapless Police. It was absolute domination in the first half as ball remained in the Police’s half for long periods.
The Police defended well initially and WAPDA had to wait till the 15th minute. International Aleem Bilal converted the penalty corner with a well directed powerful flick.
It opened the flood gates and the electric men launched an uninterrupted supply of goals. Four more came in the second quarter.
WAPDA slowed the meter a bit in the second half but still added two in each quarter.
Police had their best phase in the last quarter when they created a few chances and managed a consolation goal via a right side move expertly finished by Bilal with 9-1 goals.