WAPDA, SNGPL and NBP defeated their respective opponent team on the first day of the Second Chief of Naval Staff All Pakistan Hockey Tournament at the National Hockey Stadium Lahore. 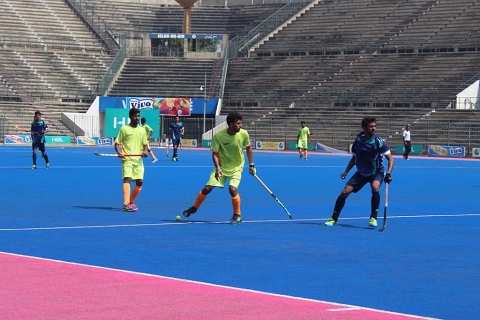 2nd Chief of Naval Staff All Pakistan Hockey Tournament 2018      National Hockey Stadium Lahore
WAPDA, SNGPL and NBP defeated their respective opponent team on the first day of the Second Chief of Naval Staff All Pakistan Hockey Tournament which is featuring eight of the top departmental sides of the country at the National Hockey Stadium Lahore.
In the first match of the day, WAPDA thrashed PAF by 8-1 where Aleem Bilal , Adnan Babar score two goals each for WAPDA while  M.Irfan, Ejaz Ahmed, Tauseeq Arshad and Umar Bhutta hammered one goal each for the winning team. PAF managed to put one in with just two minutes left though their captain Shahbaz.

After the one sided opener, the spectators enjoyed a thriller between Sui Northern Gas Pipelines Limited and Port Qasim Authority where SNGPL registered victory by 4-2.Both the teams with a number of current and former junior internationals displayed good up and down game. Chances came and went and it was goal less at the half time. The two sides turned up the heat and the third quarter saw no less than five goals.
SNGPL broke the ice within one minute of the restart. A wonderful out of the circle hit by Ali Raza was first timed by Salman, standing in the mid circle, into the goal. PQA immediately restored parity. Atif capped a good move in the 34th minute.
Soon the Gas people regained the lead. Rana Waheed’s weak attempt rebounded to him and he made no mistake second time. SNGPL extended the advantage. Salman had an excellent run down the left flank. His minus from the goal line was well capitalised by the diving Imran. The plucky PQA reduced the margin to the bare minimum in the 41st minute through Rehan via an indirect PC drill.
It was 3-2 after the third quarter. A fierce contest ensued . However, SNGPL regained the two goal cushion. Salman, who had a very good match, was in position to score his side’s fourth goal; availing a pass from the right.
In the last match of the opening day, Navy go down fighting to National Bank of Pakistan by 1-3.National Bank of Pakistan with a number of internationals players in its fold faced an inexperienced Navy who have just a few junior internationals in their lineup. But the sailors gave the bankers a run for their money. They were definitely the better side in the first 15 minutes, earning the only two penalty corners of the quarter and also had more of the possession.

NBP regained composure in the second quarter. Off the first penalty corner, Pakistan’s current drag flicker Abubakr Mahmood’s push went into the left side of the net. Attique Arshad doubled the score with a spectacular individual effort. He burst into the circle side stepping two opponents before smashing the ball into the net.
Navy were back in the game when their captain lanky Asad Aziz made it 2-1 off a penalty corner in the 35th minute. His forceful hit went into the goal off Mazhar Abbas’s pads. A keen tussle followed. In the 47th minute, a National Bank forward was felled dangerously in the Navy’s circle. Resulting penalty stroke was calmly pushed into the right corner by the Bank’s captain Ammad Shakeel Butt. Thereafter, NBP were in control most of the time and it ended 3-1.