Top eight departmental teams are participating in the Second Chief of Naval Staff All Pakistan Hockey Tournament which is schedule to be held from October 1-7 at the National Hockey Stadium Lahore. 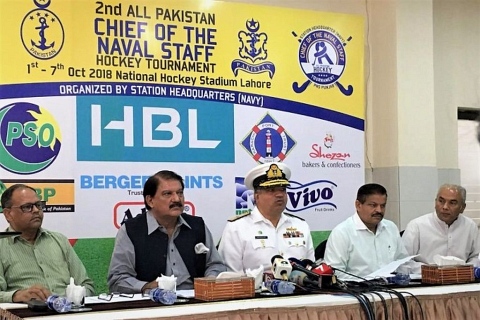 The pool matches will take place from October 1-4, with three matches each day starting at 9:00 am, 11:00am and 2:00pm respectively.
After a rest on Friday, the two semifinals will be played on Saturday, October 6 with the final & third place game on October 7.
Tournament carries handsome prize money: Rs Five Lacs for the winners, Rs Three Lacs for the runners up and Rs Two Lacs for the third Position.
There are also individual prizes: Rs 50,000 for the Player of the Tournament while the top Scorer and the Best Goal Keeper will get Rs 25,000 each.
Commodore Naimatullah expressed gratitude to the sponsors who have supported Pakistan Navy for this tournament. These include PSO, HBL, Vivo Juice, KPT, National Bank of Pakistan, Netsol, Bahria University, Bahria Foundation, Berger Paints, Shezan Bakers, and Adam’s.
Schedule: