Pakistan faced the traditional rivals India in the second semi-final and lost by 3-1 in the 2018 SAFF Suzuki Cup which is being played at Bangabandhu National Stadium in Dhaka, Bangladesh. 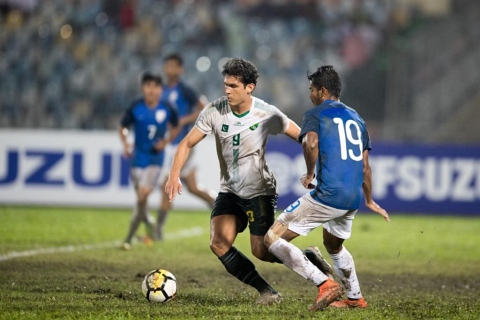 India continued with its dominant performance in the semi-final and entered the final stage of the game defeating Pakistan on 3-0.

Pakistan started in the game with great precision attempting to goal in just the first minute through Muhammad Ali from outside the box but missed it to the left. Attempt was assisted by Hassan Bashir. Hassan Bashir played well saving the attempted shot by the opponent team in the 8th minute. Mehmood Khan tried to net the ball twice on the 2 free kicks but the Indian goalkeeping was hard to tackle for him hence failing at both tries.
The first half proved to be very difficult as both teams didn't get going with scoring goals till the 48th minute when the Blues took the lead netting the very first goal of the game for their side by Manvir Singh who hit the ball through right foot shot from the left side of the six yard box to the bottom left corner assisted by Ashique Kuruniyan with a cross.
Pakistan side looked slightly more solid in the second half, bringing more effort in their play but did not succeed and gave too much space to India to come through. The Indian players hit back doubling their lead in the 69th minute yet again through Manvir Singh who scored the second goal and then Summit Passi as he found his way in the opponent’s goal field netting the third goal for the winning team.
Pakistan was resilient and well-organized for most of the game as the 28 year old Pakistani footballer, Muhammad Ali was able to net the solidarity goal for Pakistan in the 88th minute with an attempt from outside the box to the bottom left corner assisted by Hassan Bashir. Although it was a rather late and the only goal for Pakistan but it gave the players confidence to stay in control for the rest of the match. India led the match with 3 goals over 1 for Pakistan, till the end and finished the second semi-final with an emphatic win against Pakistan by 3-1.
India's Lallianzula Chhangte and Pakistan's Mohsin Ali were shown red cards for violent conduct into 86th minute of the game.
Head coach of Pakistan Jose Antonio Nogueira speaking of his team's performance said, "First half, we did a good job. We pressed well, and we had good chances to score. So did they. But the second half, we conceded a goal too quickly. We tried to score in the last minutes, but could only get one back. Overall, it was a really good game. I think it was the best game of the tournament".
In the first semi-final played earlier, Maldives thrashed Nepal by 0-3 qualifying for the final stage. Now Maldives and India will battle it out in the final of 2018 SAFF Suzuki Cup on 15th September at 06:00 Pakistan Standard Time.