Pakistan suffers loss at the hands of Bangladesh in 2018 SAFF Suzuki Cup being played at Bangabandhu National Stadium in Dhaka, Bangladesh. 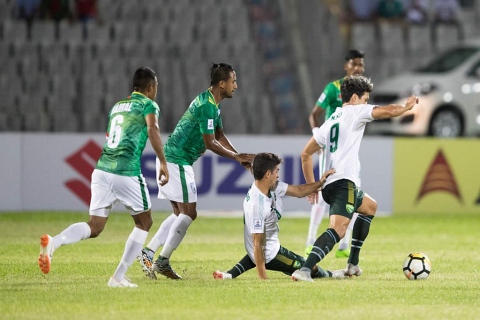 Pakistan faced the hosts Bangladesh in their second group A match at the SAFF Suzuki Cup 2018 losing the match to opponent by 0-1; under the supervision of refree Hasan Akrami.

Pakistan made a foul start in the game from which Bangladesh’s side took advantage by gaining free kicks thrice but thankfully Bangladeshi players were not able to net the ball in the goal field each time. Muhammad Ali of Pakistan made the first attempt at the opponent’s goal post but did not manage to score.
As both the teams continued the game in aggressive form, at the 29th minute Bangladesh’s Saad Uddin made an attempt to goal against Pakistan but Pakistan beautifully saved the attempt keeping the match goalless till the first half. Bangladesh and Pakistan could not make it to the goal post despite making several tries at each other’s side. Just before the ending moments of the first half, Masuk Miah Zoni from Bangladesh got a yellow card by the refree for a foul play.
In the second half, at 46th minute Pakistan’s Football Team captain Saddam Hussian made a stunning attempt through right foot shot from outside the box which was high and wide, assisted by Muhammad Riaz but did not manage to score. Bangladesh was seen in action in the second half as well as the footballers of Bangladesh kept winning free kicks but failed at every attempt. Pakistan did not stay behind for much and saved yet another attempt of the opponent team through Muhammad Ali who did not let the ball pass by right foot shot from the centre of the box. Muhammad Riaz once again showed electrifying ball play at the 66th minute of the match.
Bangladesh’s side was much fancied to progress from their previous performances in the SAFF Cups and took the lead of the game through Topu Barman who netted the solidarity goal for his team by right foot shot from very close range to the bottom right corner in the dying moments of the match leading his team towards victory.
This was a determined performance from both teams as the players gave there everything for the cause. Huge celebrations were witnessed billowing in the stands of Bangladesh as they claimed their victory of a hard fought match.
In the match played earlier between Nepal and Bhutan, Nepal trounced over Bhutan by 4-0. Now Pakistan will face Bhutan in their third group A match on 8th September at 03:00 Pakistan Standard Time.
After the game ended, Jose Antonio Nogueira remarked, "I don't think the result is a fair reflection of our performance. Both teams played very well, both had 50-50 possession. It's unfortunate that we couldn't get any points from this game,"
The two teams fought evenly for most of the match, with chances at either side but Bangladesh's Topu Barman made sure to make his team win this match as well in the game by scoring the only last minute goal.