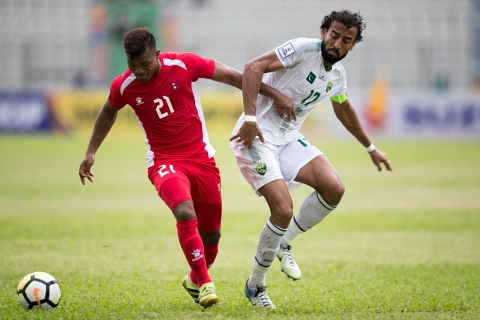 Pakistan started 2018 SAFF Suzuki Cup with opening match against Nepal to kick start their title bid with victory by 2-1.

Players from both the teams exhibited brilliant piece of game and showed amazing performance throughout the first half but Nepali players could not meet the skills of Pakistani footballers as they lost the ball posession too often to Pakistan. As Nepali footballer Biraj Maharjan got cautioned for a foul play, Pakistan’s side took advantage through Muhammad Riaz who ceased the opportunity by netting the very first goal for Pakistan in the 36th minute through penalty kick.

Nepal thwarted some certain goal scoring opportunities, though they were in aggressive mood but they failed to score much needed goal despite having several moves. Pakistan’s Mehmood Khan won a free kick at 51st minute but failed to convert it into the 2nd goal for Pakistan. Pakistan go into half time with 1-0 lead with whistle at 45+4 minute. Pakistan’s Bilawal-Ur-Rehman was among the two players who were given yellow cards for foul play in the first half of the match.

Yet again at the start of the second half, Pakistan Football Team launched themselves at the ball winning a free kick through Hassan Bahsir at 49th minute but he could not make it to a goal. Despite being in pressure, Nepal’s Football Team kept calm and made multiple attacks on Pakistani goal and in the crucial last 10 minutes netted the first goal for their side through Bimal Magar in the 82nd minute with a left footed shot from the centre of the box to the top left corner. With the scores leveled, both the teams played cautiously while looking for scoring opportunities which Muhammad Ali successfully did for Pakistan  through a header from the left side of the six yard box to the top right goal corner in the dying moments of the game with a headed pass assisted by Saadullah Khan. Overjoyed with the restored lead, Ahsanullah was shown the yellow card for excessive celebration.

Pakistan was simply magnificent in their collective obduracy against their opponent; the players of Pakistan gave their all, collapsing to excessive celebration on the final whistle, exhausted by their hard-fought victory in the opening match of the 2018 SAFF championship.

Pakistan will now face the hosts Bangladesh in their second group A match on 6th September at 06:00 Pakistan Standard Time.