Pakistan recorded a convincing 5-0 victory over Bangladesh in Jakarta to emerge as the group champions and set semi-final clash with Japan. 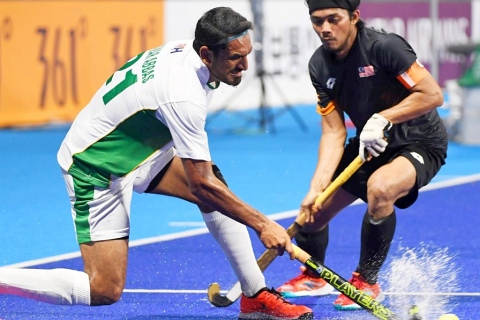 18th Asian Games 2018      Gelora Bung Karno Main Stadium, Jakarta
Pakistan closed their Pool ‘B’ campaign in hockey with a perfect record after another big win, thrashing Bangladesh 5-0 to set up a semi-final against Japan. Atiq Arshad and Mubashar Ali both scored two goals each while Ali Shan added the other goal.
Atiq opened the scoring in the second minute before Mubashar scored his goals, both penalty corner conversions, in the ninth and 25th. Ali made it 4-0 in the 38th with Atiq converting from a penalty corner 12 minutes later to round off the scoring.
Japan defeated South Korea to qualify for the semi-finals form Pool A, which was topped by India.
India are the top team in Pool A with five wins from as many matches. They will face second-placed Malaysia from Pool B.A marquee final between arch-rivals Pakistan and India is on the cards if both teams beat their respective opponents in the semi-finals on August 30.
The final will be played on September 1.Pakistan manager Hasan Sardar said that there was no room for complacency. “We have to win our semi-final and then the final. No other result will be satisfying,” he added.

“We prepared the team for this event for months, so we must win the gold medal here,” Pakistan manager Hasan Sardar said!.

“We want the players to give their hundred percent in these two matches,” he further added.

Sardar said that the players played well against Bangladesh, who were an improving side. “The forwards made combined moves and were successful in scoring five goals,” said the former Olympian. “Our forwards were not scoring goals; we were wasting penalty corners; but now there is a big change in the Asian Games and our boys have clicked,” he added.
He said that Pakistan had scored 45 goals in five matches and only one was scored against them. “That we conceded only one goal shows how strong our defence has been. It means that all our players are doing their jobs. The defenders and the goalkeeper are proving to be a strong wall. The increased number of goals means that midfielders and forwards are making result-oriented moves,” said Sardar.