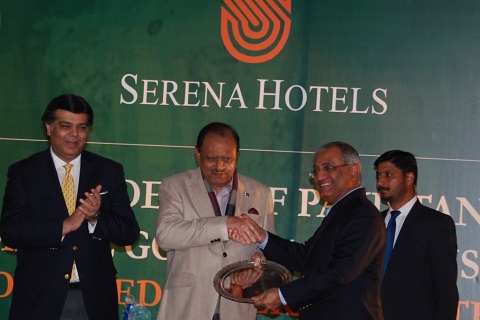 Serena Hotels in collaboration with the Pakistan Golf Federation and the Islamabad Golf Club hosted the President of Pakistan 31st Gold Medal Golf Championship 2015 under the banner of their Sports Diplomacy Initiative. The three day tournament took place from 26 October, 2015 to 28 October, 2015 at the Islamabad Golf Club. The prize distribution ceremony was postponed to a further date due to the devastating earthquake that struck Pakistan last October, 2015. Serena Hotels launched a Spirit of Compassion relief fund in November across all its Hotels in Pakistan to aid relief efforts.

The Championship is the most prestigious golfing event in Islamabad’s calendar year with a prize money of 1.6 million Rupees. The President of Pakistan graced the Prize Distribution Ceremony as Chief Guest. He lauded the initiative taken by Serena Hotels and the Pakistan Golf Federation in hosting the Championship and said it was an excellent way to promote cultural exchange in Pakistan, and promote interaction amongst various segments of society. CEO Serena Hotels, Mr. Aziz Boolani also spoke at the occasion, “Serena Hotels will continue to serve the communities wherever we are located. Events such as the President of Pakistan Gold Medal Golf Championship 2015 help promote and revive an interest in sports amongst Pakistan’s youth. Our guests’ continuous support and participation is a vital aspect of the success of all our Initiatives. “

The winners of the Serena Hotels Invitational Tournament were H.E Dr. Song Jun, South Korean Ambassador for the Diplomatic Category and Mr. RiazPesnani for the Main Category.