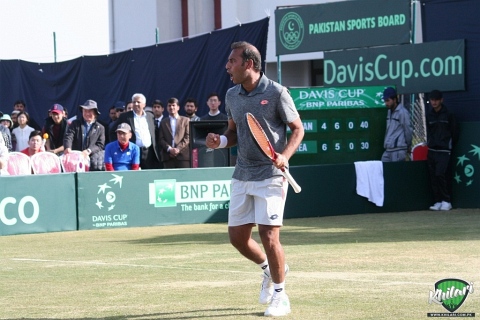 
Khan was looking down and out as Seong Chan won the first set easily by 6-4. Seong breakes the third serve of Khan and took lead by 2-1. Aqeel fought hard to level the score 4-4 but Chan breaks the 9th serve and took advantage over Pakistani opponent and won the first set by 6-4.


Chan started the second set with the same pace and breaks 3rd service of Aqeel Khan but resilient Khan was down but not clearly out of the game as he broke back the 6th serve to level the score at 3-3. Both the players tried to down each other levelled once again at 4-4 and then 5-5. At that point Khan made it 6-5 and then he breaks the 12th serve of Chan to win the second set by 7-5.


In the third and decisive set, both players played attentively and none of the two wanted to provide any chance to opponent. Both the players held their serves but Khan breaks the 12th serve of Chan and won the third set and the match to make it 2-0 for Pakistan.