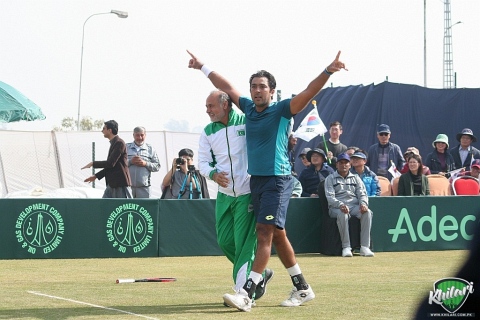 Aisam ul Haq easily won the first set against Soon Woo Kwon by 6-3 as he never allowed Korean to settle and play freely. Aisam brokethe 3rd serve of Soon Woo to took lead of 4-2 in the first set. Aisam looked in good form as he scored 9 Ace serves in the set.

Drama continued in the third set as it started with Aisam’s dominance. Pakistani ace breaks the second serve of Woo and took 2-0 lead but Korean came back strongly as he broke back the 7th serve to reduce the lead to 4-3 and later leveled the score to 4-4. Match was then once again equalized on 6-6 to setup a nerve wrecking tie-greak.

On tie-break, Aisam held his first serve to later concede 3 consecutive points as Soon Woo took lead at 3-1. Aisam won another point to reduce the lead 3-2 but once again it was Korean who earned 2 more points to make it 5-2. With some luck and huge support for the Pakistani ace, Aisam managed 2 more points before the Korean Soon Woo earned 2 Match Points at 6-4. Pakistani player showed all his experience to fight back furiously as he earned back-to-back four points to clinch the victory out of Soon Woo’s hands and won the first Davis cup rubber to make it 1-0 for Pakistan against Korea.