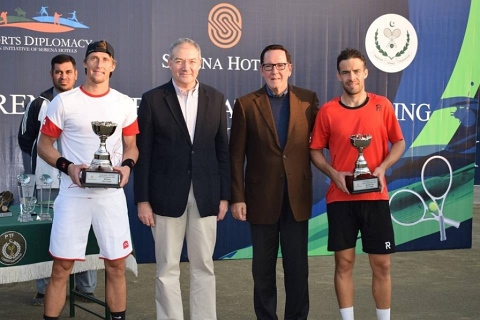 No.1 seed Ivan did not allow Pere to play freely and with the powerful smashes Russian defeated Pere in straight sets by 6-3, 6-4. Spanish player was in good form and played brilliantly throughout the tournament was remained completely on the back foot against the No.1 Nedelko. Pere defeated Aqeel Khan in 1st round match while Samir Iftikhar in quarterfinal had no answer Ivan’s powerful smashes.


Ivan won the first set 6-3, by breaking third serve of Riba while he won the second set 6-4 by breaking 10th game. The early break helped Russian to win the match who also stunned Riba and the crowed with his forehand and backhand shots. Pere twice came close to break back but Ivan stood too firm in his ways and saved his serves.


The same story continued in the second set and just 1 break was enough for Ivan Nedelko to win the $15,000 event. Riba was clearly seen tired playing against the top seed Nedelko. Russian won the second set by 6-4 and won the tournament as well.


Turkish Ambassador HE Sad?k Babur Girgin was the chief guest of the Serena ITF Futures Tennis Tournament Final who witnessed the match and expressed his pleasure to be the Chief Guest at such a momentous occasion and enjoyed the match. He also hoped that the Turkish players will also participate in the Futures Tournaments.


The President PTF Salim Saifullah during his speech expressed his pleasure at the successful conduct of the Tournament and thanked the Chief Guest, The Tournament Sponsors Serena Hotels, PTF Team, the Govt. and all its functionaries especially the Law Enforcement Agencies.
A Large number of crowed was present to witness the exciting matches throughout the tournament. Serena Hotels ITF Futures Tennis Tournament, 2017 ended on a good note and an exciting display of Tennis was displayed in the tournament.


Following is the result