Pakistani duo won the 1hr 34min long final against foreign pair of Luka Pavlovic of France and Pere Riba of Spain in straight sets with 7-6(3), 7-6(4) 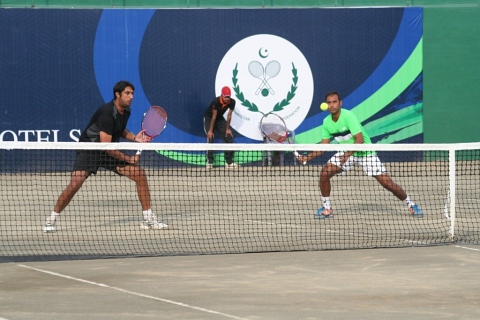 The doubles final of the Pakistan Futures F1 lived up to the exceptions of the huge crowd who have come to support the Pakistani pair of Aqeel Khan and Shahzad Khan as the thrilling match ended in straight sets in favor of the Pakistani duo.

Both the sets went into the tie break as the intense battle for the upper edge happened during the sets. Aqeel and Shahzad Khan won the opening serve of the match followed by the confidence boosting break in the very next game. Pakistani duo enjoyed the lead till 4-2 before the Riba/Pablovic pair break back on the 4th serve as the set advanced in to the tie break. The foreign duo took an early lead in the tie break at 1-3 but the Khan;s came back strong with 6 consecutive points to win the set.

The second set proved to be a roller coaster ride for the crowd and players alike, as the Pakistani pair once again had the first break on the 3rd serve of Riba/Pablovic. The lead was further extended to 5-2 with a consecutive break. Just when the match started to appear as a sure victory for the crowd favorite duo of Aqeel and Shahzad, the Spanish and young French struck back-to-back breaks to shift the momentum and level the second set at 5 games each. The set advanced into the tie break as the tempers run high in the Pakistani camp. With some rethinking and regrouping during the short break, the Khans' took and lead first at 5-2 in the tie break. Riba and Pablovic could do not much against the good skills shown by Aqeel and Shahzad as they win the tie break at 7-4.