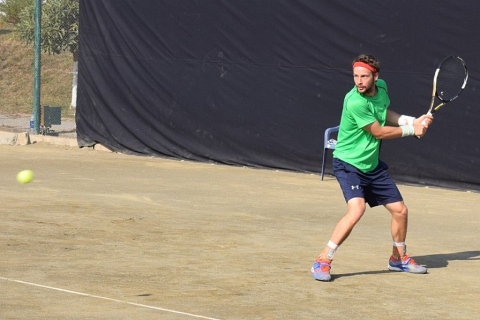 In the first semifinal between the top seed Ivan Nedelko and the 3rd seed Russian Kristian Lozan, Ivan defeated opponent in the straight sets by 6-2, 6-3. Second Semifinal was played between No.4 seeded Spanish player Pere Riba and 5th seeded Russian Shalva Dzhanashia and the Spanish player in a thrilling encounter defeated Russian challenger in a hard fought 3 set match by 6-1, 7-6(2), 6-3.


Ivan Nadalko played freely and did not allow his opponent to play at his will. The Russian player broke the 2nd and 8th services of countryman and only him to take 2 points in the first set. In the second set, Kristian resisted against the top seeded but could not find the better serves as Nedelko broke 3 serves of Kristian including to back to back services to win the match.


In the second encounter of the day, No. 4 Spanish Pere Riba played the match against the 5th seed Russian Shalva Dzhanashia and Riba gets hard time from his Russian opponent as the Spanish Pere Riba took 3 sets and 2 hours and 34 minutes to down his resilient Russian opponent. No. 5 Shalva did not feel any resistance in the first set from Pere and easily won the set by 6-1. Second set was initially once again dominated by Shalva as he broke the 6th serve to take 4-2 lead but Pere broke back the very next serve of Shalva to reduce the lead to 4-3 and after that it was all Pere’s game as he equalized the game on tie break 6-6.


Shalva takes two initial points in tie break but again it was Pere as he then took 4 next point and won the second set by 7-6(2). In the last set, once again Shalva tried to take control as he broke very first serve of Pere but the Spanish once again broke back the very next serve to level the score 1-1. Pere Riba once again breaks the 4th serve and further enhance his lead to 3-1 and finally with an Ace in the 9th serve Pere Riba won the match and qualifies for Men’s singles Final.