Samir out, Aqeel-Shahzad through to Final of Serena ITF Tennis Tournament 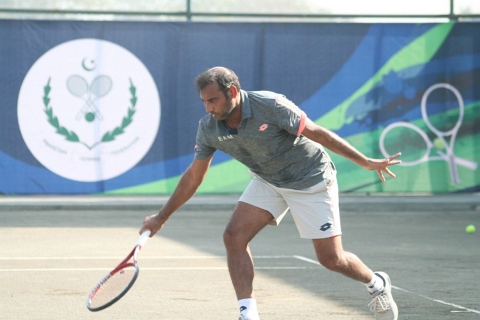 
Serving first, the Pakistani pair started confidently as they won the first game withiout conceding a point. The only real break opportunity came in the 5th game when the Spanish-Canadian pair earned to break points but failed to convert any. The Pakistani duo held their nerves as the set advanced in the tie-break. The foreign pair got an early lead of 0-3 in the exciting tie-break which saw the Khan’s strike back to take a lead 6-5 but then had to save 3 set points at 7-8, 8-9 and 9-10. With some sound support from the crowd, the Pakistani pair of Aqeel and Shahzad Khan won the tie-break 12-10.


In the second set, the two Khan’s controls the set firmly as the Pakistani pair breaks the service of David/Kelsey in the 3rd game to make the score 2-1 but the break was short-lived as David/Kelsey broke back in the very next game to level the score 2-2. In the 9th game Aqeel/Shahzad once again broke the service of Spanish-Canadian pair to take 5-4 lead. Pakistani pair won the second set easily by 6-4 and won the match in straight sets by 7-6(10), 6-4.


In the 8th game of 1st set Peter/Julian breaks the service of Austrian-German pair to take 5-3 lead but Pera/Luke broke back the very next serve of their opponents to reduce the lead 5-4. The match was equalized the game on 6-6. In the tie break, unseeded Pera Riba/Luka Pavlovic won the set by 6-4 to take 7(4)-6, 6-3 win. In the second set Pera Riba/Luka Pavlovic thrashed the 2nd seed Peter/Julian by 6-3. In the 3rd game Peter/Julian breaks the service and took 2-1 lead but then Pera/Luke twice broke the serves of their opponents in the 4th and 8th game and easily won the second set and the match by 7(4)-6, 6-3.


In Men’s singles first quarterfinal, Spanish Pere Riba ousted Pakistani Samir Iftikhar in another thrilling game by 6-4, 6-4 at the center court of Syed Dilawar Abbas Tennis complex, Islamabad. Pere took 1 hour 38 minutes to take down his Pakistani opponent. Samir fought hard but some mistakes costs him the 1st set. The match saw too many ups and downs as both the players were in good nick. Pere breaks 6th game and takes 4-2 lead over Samir. Pakistani player fought back and broke the 11th game to reduce the lead 5-4 but Pere broker back the next game and wins the set by 6-4.


In the second set, Samir was leading the set as he breaks the Pere’s 7th game serve and make it 4-3 but then Pere broke 8th and 10th games and won the set and the match 6-4, 6-4. It is pertinent to mention here that Samir Iftikhar defeated German No. 6 seed Julian Onken in the Men’s singles 2nd round while Pere Riba ousted Pakistan’s No.1 Aqeel khan in the 1st round match and defeated Roy Hobbs of Singapore in the 2nd round match.