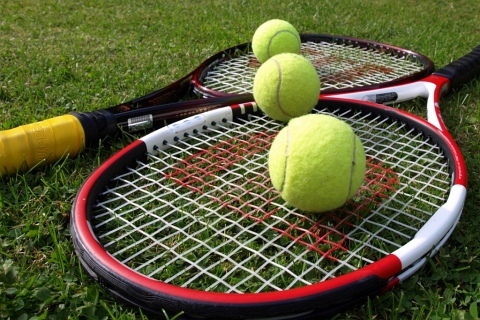 On the opening day of Serena Hotels ITF Futures Tennis Tournament, only 4 singles and 8 doubles matches were played and between the matches, Pakistani players showed their class to their opponents. Ahmed Chaudhry on the opening match of the day could not move forward but displayed his skills against the Russian Nikolay Vylegzhanin and gave him hard time. Nikole moves to the second round after a hard earned victory in a 3 set match. Nikole wins the match by 6-4, 4-6, 6-2. From one set down, Ahmed bounced back in the second set and stunned Nikole by 6-4 but the 3rd set turned to be one-sided as Nikol outsmarted Ahmed easily by 6-2.


Pakistan’s No.2 M. Abid in his 1st encounter ousted local player Muhammad Shoaib by 6-0, 4-6, 6-0. In the 1st set, Abid did not allow Shoaib to move and played with his own will and without conceding a single point he defeated Shoaib but in the 2nd set Shoaib came from behind and defeated Abid 6-4. In the last set Abid again dominated the game and won the set and the match without conceding a point.


In the Men’s doubles first round match, duo of Pakistani Yousaf Khalil and Afghani player Asad Kebir stunned Russian pair of Dmitiry Myagkov and Ivan Ponomarenko 0-6, 7-5, (11-9). The Pak-Afghan duo was completely outclassed by Russian duo in the first set and without conceding a point won the set but in the second set the Pak-Afghan players displayed good show of their skills and won the set by 7-5. Both the pairs fought hard for to win the 3rd set but it was Yousaf and Asad who played superbly and won 3rd set by 11-9 and won the match.


In another match, Pakistan No. 1 Aqeel khan pairing with Shahzad Khan ousted countrymen Waqas Malik and Usman Rafique in straight sets.
The top seeded Spanish-Canadian duo David Perez Sanz and Kelsey Stevenson comfortably defeated their Pakistani opponents Muzamil Murtaza and Muhammad Abid in straight sets and moved to next round while the second seeded pair of Peter Goldsteiner (Austria) and Julian Onken (Germany) defeated Asad mehmood Khan and Fahad Mehmood Khan by 6-0, 6-0. Vadim Alekseenko from Ukraine pairing Nikolay Vylegzhanin stunned the third seeded Russian pair of Shlava Dzhanashia and Ivan Nedelko and through to next round.