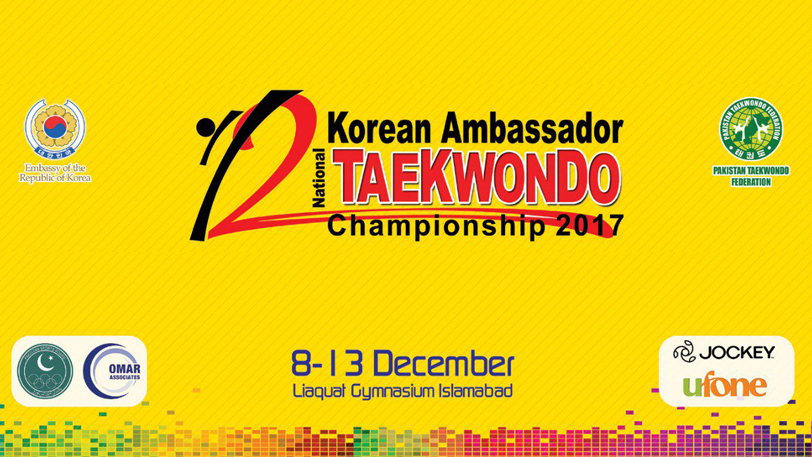 
12th Korean Ambassador National Taekwondo Championship 2017 is scheduled to be staged at Liaquat Gymnasium of the Pakistan Sports Complex from December 9 to 13 December. The championship is being organized by Pakistan Taekwondo Federation (PTF).

The approximate strength of the officials and athletes will be around 1000 to 1200. Korean Ambassador, Korean Military Defense Attache, Director General Pakistan Sports Board (PSB), Minister Inter Provincial Coordination (IPC), Secretary IPC, Director Army Sports, Director Naval Sports and other renowned sports dignitaries will be present in different ceremonies during the championship.

In the history of National Championship in Pakistan record 45 - 50 Teams from Provinces, Departments, Services, Gilgit Baltistan, AJK, Islamabad and Clubs are participating in this prestigious event. The event is being sponsored by Korean Embassy, Islamabad, Ufone, Jockey, Omer Associates.

This is the first ever biggest Taekwondo Event in Pakistan and Players to participate in 4 different categories.

Following are the categories