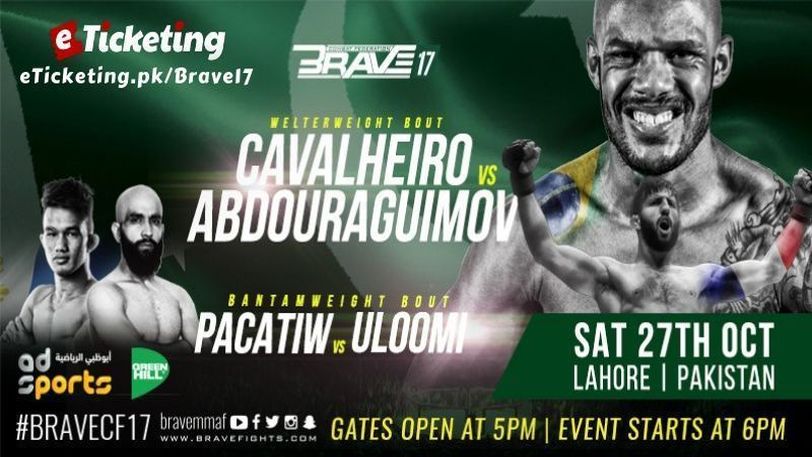 27 October, 2018
Lahore
Nishtar Park Sports Complex Lahore
MMA
The Bahrain-based Brave CF is set to launch its brand in Pakistan with its first ever BRAVE 17 event in the country taking place at Nishtar Park Sports Complex in Lahore on 27th October. The gate of Nishtar Park Sports Complex will open on 5:00 pm (PST) while the mega event will starts on 6:00 pm (PST).
Brave 17 is the first International mixed martial arts event to be held in Pakistan. Athletes representing 12 nations are confirmed to compete in Pakistan. Brave 17 will become the most broadcasted combat sports event to take place in history of sports in Pakistan.
The welterweight contenders veteran Brazilian Rodrigo Cavalheiro and Abdoul Abdouraguimov – an unbeaten prospect out of France will fight in the main event of Brave 17, while Pakistan’s Uloomi Karim will be featured in the co-main event where he will face Jeremy Pacatiw from Team Lakay, Philippines.
Joining Uloomi Karim on the main card are Mehmosh Raza, Zia Mashwani, Haider Farman and Najam Khan.
Uloomi, who famously defeated India’s Yadwinder Singh in 2016, and brought his young sport some much-needed attention. The fight against Pacatiw will offer Uloomi a chance to bounce back following his surprise defeat to Afghanistan Emran Tarakhil last month. That defeat had snapped a three-fight winning spree for the Islamabad native, who must be raring to put that setback behind him, especially in front of his home fans and at a high-profile event that Brave is cooking.
Mehmosh RRaza got a 100% record as he fought twice under the banner Rebal FC. He first defeated Sima Yi via a first-round rear-naked choke while in his second bout, ‘The Renegade’ outplayed his Ukrainian opponent IGOR Grytskiv in the third round of Rebael FC-7 in featherweight class.
Pakistan’s Haider Farman, who claimed a remarkable victory by defeating India's Atif Mohammad Khadim in of Brave CF 9 in November 2017. The fight opened with fervent exchanges between the two, the encounter however ended with Haider being declared as the winner by the judges.
Egyptian lightweight star Ahmed Amir will make his much awaited return at Brave Combat Federation on October 27 at Brave 17 in Lahore, Pakistan. The lightweight fighter, who is making his return after six editions of the show, will face undefeated John Brewin from New Zealand in the same division.
The winner will most likely be the first contender to new champion Jarrah Al-Selawe.
Pakistan will be the twelfth country to hold a Brave Combat Federation event, after Bahrain, Brazil, United Arab Emirates, India, Kazakhstan, Mexico, Jordan, Indonesia, Northern Ireland, Morocco, and Colombia. South Africa and Saudi Arabia are also set for Brave events in December.