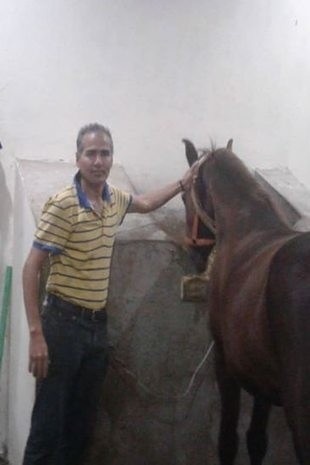 
After trying Kabaddi and Jamnasitc, Rider Qasir Manzoor Mughal has been practising with his horse to become the superfluous tent pegger and the best horse racer.

Rider Qasir Manzoor Mughal is getting training from Ustad Arif. Qasir belongs from Rawalpindi, commonly known as Pindi, is a city in the Punjab province of Pakistan.

"His objective is to become the best Tent Pegger and the best Horse Racer on an International level even in all to the provinces and previous games records are only the different phases to become the perfect HORSE RIDER - this is the practice journey of a horse rider."

And even as teacher writing Thesis on the creation , and innvention of one of new branch of Engineering under Natural Sciences which branch name is ANE - " applied natural engineering " As each invention and innovation ever is collective efforts of humans so that is why follwoing official organizations are fully functional along me for all sort of theoratical and practical work out here organizations names are given even along the details of the particular person for participate as in the Branch of ANE i am inventing and writing the scientific laws and rules and regulations of one of new Branch of Engineering so that is why even here i am presenting the Human Future Technology which detail along follwing i am on the way to Done.

Qasir said player can make the most effective and the most efficient game plans for National and even Internaional level if his education is also on the way to attain a high position.

" Best Player can be the Best Student"