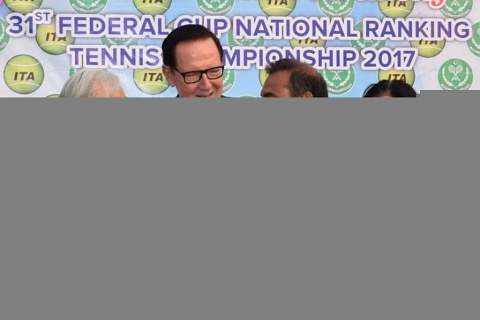 Young Muzamil played exceptionally well against the veteran player and No.1 Pakistan’s Aqeel Khan. Muzamil won the 1st set by 6-3. In the score of 3-3, Muzamil breaks in the 4th game and then did not allow the Aqeel Khan to settle down and wins the set by 6-3. In the second set Aqeel Khan came back hard from behind after 1 set down and takes charge of the game as he breaks 8th game of Muzamil at the score of 40-15. Aqeel Khan won the second set by 6-3. In the final set, Aqeel takes full command of the game as hit the shots down the line and used all his experience to beat Muzamil without conceding a single point. Muzamil could not resist against the powerful forehand, backhand drives. The match lasted for 95 minutes. Aqeel Khan won the cash prize of RS 45000 along with the winning shield while Muzamil got RS 26,000.

Hamza Roman from Peshawar wins the Boys & Girls U-10 title after beating Azhar Abdullah in straight sets by 4-0, 4-0.

150 players participated in the 6 days long championship from all over the country and amount of RS. 300, 000 was distributed among the players. Mr. Salim Saifullah Khan President PTF was the Chief Guest and Senator Syed Dilawar Abbas as Guest of Honor distributed the prizes amongst the winner and runner up of the Championships. Mr. Khawar Hyat Khan, SVP PTF, Mrs. Nighat Saeed, Vice President and Head of Women Wing ITA, Gen. Shahida Badshah and lots of tennis fans witnessed the Men’s Singles Final.